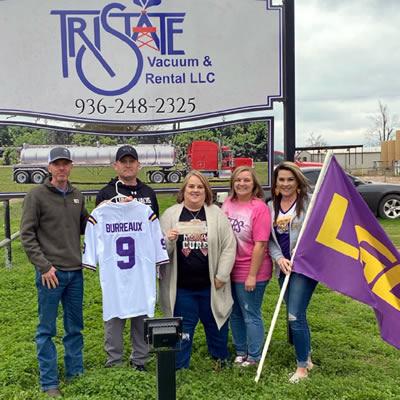 February 6, 2020 - Living in Joaquin you will find yourself surrounded by LSU fans. Chrisco Bragg had no choice and explained, "My only choice was to challenge them to a wager. If LSU wins, I would wear LSU gear and stand at a HWY intersection in Logansport for an hour and accept any jeers I may receive. If Clemson wins, then the taker had to wear Clemson gear and do the same."

Crystal Brooks was bold enough to accept and the bet was on. LSU continued their dominance in college football and the outcome was inevitable. 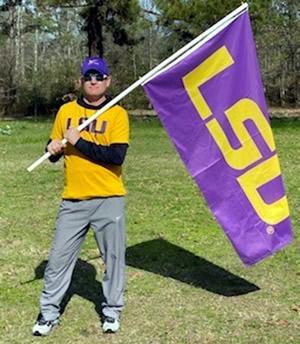 Bragg mustered up the courage and reluctantly wore the LSU gear for an hour and listened to the fans drive by and cheer.

Bragg told the rest of the story, "BUT this is where the story takes a turn for the better. I proposed that we raffle off a Joe Burreaux #9 jersey and give the proceeds to charity. Mrs. Brooks chose Boo’s Battle founded here in Joaquin as the charity to receive the benefit. The bid started and quickly rose into the hundreds until Troy Massey of TriState made a very generous bid of $500."

After the time limit expired, Mr. Massey came out on top as the winning bid. He received the jersey, however, the REAL WINNERS are the charity and the people that will be helped and comforted during their time of need.

If anyone wants to donate to a great cause, please contact Celeste Lewis (936-615-7468), Amanda Lewis Kirby of Boo’s Battle (903-754-9291), or on Facebook (Boo's Battle Support Fund) and help families in need as they battle the awful disease we know as cancer. A football game and a little wager turned out to be fun and a way to help our community.