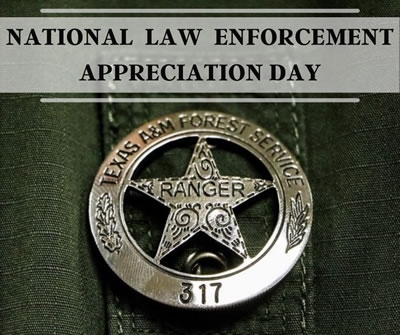 January 7, 2021 - Texas A&M Forest Service has been a guardian of the state’s natural resources for over 100 years, but not everyone realizes that they have a law enforcement department to help protect and serve. 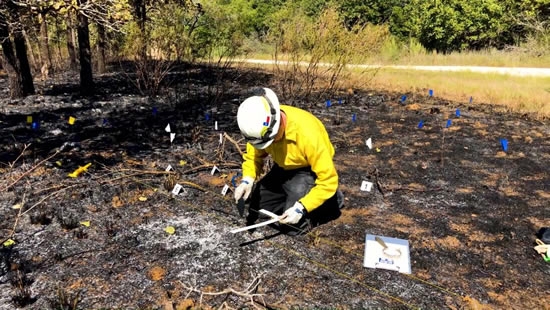 More people are familiar with Game Wardens, according to Hudson, because of their numbers. There are almost 500 game wardens in Texas, while Texas A&M Forest Service (TFS) only has 11 full-time investigators and up to 14 “additional duty” officers, who are peace officers that support the law enforcement department when they aren’t battling wildfires or completing their primary roles for the agency.

While law enforcement officers have traditionally been few in number for the Texas A&M Forest Service, they’ve been around for about 100 years.

“Historically, the law enforcement department started after some large, catastrophic fires struck east Texas in the early 1920s,” said Les Rogers, a former Chief of Law Enforcement at TFS, and the current Interim Chief. “The state reached out to the forest service and asked for help curtailing those fires. And there’s not a better prevention method than somebody with a citation book.”

Initially, TFS law enforcement officers were appointed by the county commissioners’ courts in east Texas, but in the 1960s they moved under the umbrella of the Department of Public Safety as “special rangers.” While this commission was distinct from the Texas Rangers, TFS law enforcement used the title “ranger” up until the late 1980s, and they still use the Ranger badge, which—like the Texas Ranger badge—is pure silver and made from an old 5-peso coin.

Today, TFS law enforcement officers are commissioned by Texas A&M Forest Service under the Texas A&M University System’s Board of Regents. This gives them state-wide jurisdiction, and full authority as peace officers. As natural resources officers, their main focuses are timber-related crimes and wildfire investigation. Because of this, all TFS officers are trained in wildland fire investigation.

“Wildfire investigation is a process of elimination,” said Rogers. “They go in and look at weather patterns, scarring on trees and burn patterns. They start eliminating certain causes like lightning or powerlines, and then hopefully they can pin it down to the point of origin where the fire started.”

Since almost 90% of all wildfires are started by humans, this process is critical for maintaining accountability. While most wildfires aren’t started intentionally, people should know if there’s a burn ban in place, or how to properly dispose of trash and debris on their property. And that’s a surprisingly large part of the TFS law enforcement department’s role – educating the public, and making people more aware. But if you were to start a fire that spread onto another person’s property, you could be charged with anywhere from a Class C Misdemeanor to a Felony.

“If your fire damages or destroys someone else’s building, even if you didn’t mean for it to, and you were reckless, it’s called reckless arson,” said Hudson, “and it’s a felony.”

“He had been lighting fires in his county for almost two years,” said Hudson. But after working with the local fire department and sheriff’s office—and working with them to identify patterns and preserve evidence—they were able to locate the source of one of those fires last Christmas.

“We recovered the remnants of what he used to light the fire, and we found the rest of it still in his passenger seat,” said Hudson. “With this evidence, after interviewing him, they got a full confession.”

Arson and criminal charges aside, TFS law enforcement officers are still the subject matter experts on wildfire and timber theft. Anytime a wildfire is involved, TFS can be consulted and/or called in to investigate. The same applies to timber theft and questions concerning the natural resource code.

Timber theft takes a variety of forms, and it occurs more frequently in east Texas—where most TFS law enforcement personnel are stationed—but a common case usually involves widows or elderly people. Perpetrators will convince landowners that their timber is worth a certain amount, then they will harvest it all and try to settle for a lesser amount, or they won’t even pay landowners at all.

“Over the last 5-6 years, we’ve seen an increase in people fraudulently getting on someone’s property, cutting down the timber, and never paying them a dime,” said Rogers.

One case was so brutal, it stuck with Rogers. A woman that cultivated a tract of land with her husband became a widow, and after her husband passed away a young man showed up on her doorstep promising to give top dollar prices for her timber.

“They went in and took not just what they said they were going to take, but they took additional trees that should not have ever been touched,” said Rogers. “And they left without paying her, leaving her land virtually unusable nor able to replant without a huge amount of rehabilitation.”

This can be particularly painful since most land-owners only harvest their timber once or twice in their lives – another reason why it’s so important that the natural resource code is upheld and enforced.

“We represent landowners and work to get them their compensation, or at least some kind of justice,” said Rogers. “Because there’s not a lot of law enforcement agencies across the state that will view this as a criminal act. They see it as a civil act. But if they didn’t get what they were promised in the contract—or if they’re only partially paid—it is not a civil case, it is a criminal case.”

Not all timber theft is contract based, though. Many TFS Investigators have had to deal with perpetrators that were more obvious criminals.

“We worked with the city of Dallas last fall. A guy was literally taking a chainsaw and sawing up trees on a city park, and then selling it,” said Hudson. “The Dallas City Marshals asked for assistance in building the case. It’s not that they couldn’t – it’s just that they weren’t familiar with the Natural Resources Code. And that’s where our subject matter expertise comes in.”

Hudson had another case in Jack County where a man cut down a famous pecan tree. The Sheriff’s Office called Hudson because they weren’t familiar with how to track it down, and through detailed, disciplined police work, Hudson was able to locate what was left of the tree on a property in a neighboring county. The man there, a woodworker, had already sold half of the tree, but after getting a full mirandized confession, Hudson and the sheriff’s office investigator seized what was left and charged the man with a felony.

Hudson and Rogers both emphasized that they are not stand-alone entities. Instead, they see themselves as subject matter experts in both forestry-related crimes (like timber theft) and wildfire investigation, but their primary role is to support local and state cooperators.

“Our only role is basically to find and document the facts,” said Rogers. “However that information is used, either civilly or criminally, is up to the courts.”

Texas A&M Forest Service’s Law Enforcement Department has grown substantially in recent decades with more investigators joining the force, and the law enforcement department as a whole is looking starkly different than in the past.

“We’ve pretty much had a complete turnover in the last couple of years from officers retiring,” said Rogers. “And so we’ve got a pretty new, young bunch of law enforcement investigators out there.”

Many of these were additional duty officers for TFS, and the majority have a background in wildfire. As investigators, they’re putting their skills and experience to work at TFS, by protecting Texas’ natural resources, educating the public, and enforcing state laws.