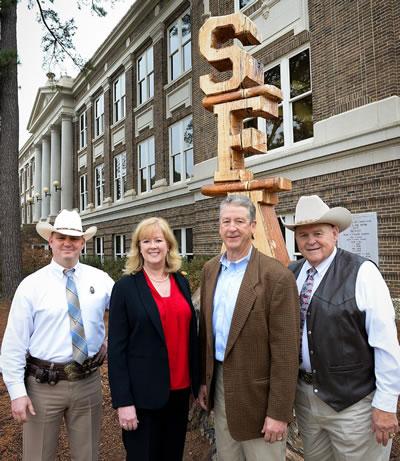 January 3, 2020 Nacogdoches — Beginning in fall 2020, Stephen F. Austin State University students who have suffered the loss of a law enforcement officer parent or spouse killed in the line of duty can apply for a scholarship designed to help them move forward.

The scholarship was prompted by the death of Bobbie Hargis Todd’s father, Nacogdoches Deputy Sheriff John Arlington Hargis, who was killed in 1928 while serving an arrest warrant when Bobbie was only 18 months old.

The Bobbie Hargis Todd Scholarship was established by her children, Bobbie Ann Todd Anderson and Richard Todd, in memory of their mother, whose life dramatically changed after her father’s death.

“My grandmother and her five children had to do whatever they could to survive and move forward,” Anderson said. “My mom and her siblings certainly would have benefited from financial assistance like this for college.”

Fortunately, Bobbie was able to live at home with her mother a few blocks from SFA. Her older siblings managed to chip in and help pay her tuition. While attending SFA, she was a cheerleader and member of the Fideles Social Club. During her freshman year, she began dating World War II veteran Joe “Orville” Todd, and they married Feb. 22, 1948.

“Upon their marriage, Mom moved from Nacogdoches to live with her husband and widowed father-in-law on a farm in Henderson. It was quite an adjustment,” Anderson said.

Employed first at the Rusk County Courthouse, it was after the birth of her first two children that Bobbie made the decision, encouraged by her husband, to return to college. She commuted daily to SFA and earned her degree in elementary education in 1957. She then taught third and fourth grade in the Henderson Independent School District for 23 years.

“Many times in her career, Mom was asked to advance to a principal position, but she wanted to teach,” Todd said. “She loved the kids.”

Bobbie’s students loved her back. For years after leaving the classroom, she received letters of admiration from former students for the way she successfully faced adversity following the death of her father, and the inspiration and encouragement she gave to her students.

“Because of her upbringing in a family with no father, mom had a special skill of working with children from low-income families,” Anderson said.

Both Anderson and Todd recall many students referencing the strong math and reading skills they learned in her classroom.

To continue their mother’s spirit of survival and support, Anderson and Todd established this scholarship for students whose parent or spouse has died in the line of duty, with preference given to students pursuing a degree in elementary education.

Texas Ranger Jim Hicks said the child or spouse of an officer killed in the line of duty can make one of two choices. “They can give up, or they can press forward. This scholarship is a tool that can help them move forward,” Hicks said.

Sabine County Sherriff Thomas Maddox, president of the Sheriffs’ Association of Texas, knew Bobbie and understood how hard she worked to be successful. “She also had a special way of making you feel like the most important person in the world,” he said. “She would have been very proud of this scholarship.”

Anderson said her mother’s unusual circumstances made her very strong, and she hopes the scholarship can pass that strength to others facing the same challenges.

“The children and spouses of officers killed in the line of duty form a very tight-knit community,” Anderson said. “We want them to know we’re here to support them.”

For information on how you can aid students who have lost a parent or spouse in the line of duty through this scholarship, contact the Office of Development at (936) 468-2278.