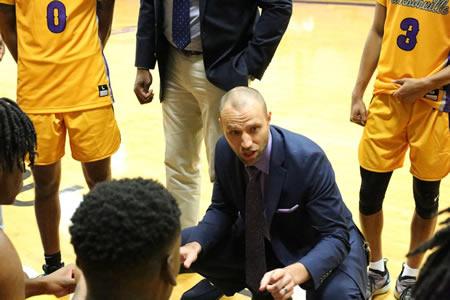 May 9, 2019 - Panola College has hired Aaron Smith as the new Men's Basketball Coach. Aaron Smith will be taking over a Panola program that has risen to the top of the Region XIV standings over the last 4 years under departed head coach Grant McMillan, with a 2017 Eastern Conference Championship and an appearance in the 2017 NJCAA National Tournament, and 4 straight NJCAA Regional playoff berths.

“I am absolutely thrilled to be the Head Men’s Basketball Coach at Panola College,” said Coach Smith. “Words cannot express how grateful I am to President Dr. Powell, athletic director, Mr. Don Clinton, and the entire Panola family. I look forward to building on this already wonderfully laid foundation and I cannot wait to get to work.”

Smith comes to Panola after spending 4 years at Jacksonville College where he led the Jaguars to back to back Region XIV South Zone Championships in 2018 and 2019. His teams have been known as some of the hardest teams to guard in Region XIV and they have averaged 93 points per game during his tenure. 3 out of 4 of Smith’s seasons have produced 20 or more wins and he has coached 6 members of the All-Region 1st or 2nd Team and 1 Honorable Mention All-American in Christian Barrett. In addition, each of the past two seasons he has earned Coach of the Year from texasjucobasketball.com.

Prior to his head coaching tenure at Jacksonville, Smith served briefly as an assistant coach under, then head coach, Jody Bailey prior to Bailey’s departure for the University of New Orleans. Before joining Jacksonville College, Smith spent 5 years in total in the AAU Summer Basketball ranks. He started the FV 5:17 program, which he grew into one of the premier summer programs in the ultra-competitive Dallas summer basketball circuit. While leading FV 5:17, he sent numerous players on to the Division 1 level and another player who is currently playing professionally in China.

Coach Smith is a proud graduate of Prairie View A&M University (2008) where he was a standout scorer who had the privilege of earning Southwestern Athletic Conference Player of the Week his senior season. His playing career continued as he was the 4th Overall Pick in the 2008 CBA Draft and won the CBA Championship in 2009 as a member of the Lawton Fort Sill Cavalry coached by 4-Time NBA All Star Michael Ray Richardson. Smith also spent time playing in France and Bulgaria. He also earned his Master of Theological Studies from Southwestern Baptist Theological Seminary in 2017.

Smith, and his wife Keri, have been married since June 2016 and they have a 19-year-old son, Cameron Carson, and a 2-year-old daughter, Nicole.

"We are excited to have Aaron as our new head basketball coach. He has proven he knows how to win on and off the court,” noted Don Clinton, Vice President of Student Services and Athletic Director at Panola College. “We feel confident that he will continue the winning tradition that has been established and will truly make a difference in the lives of our student-athletes."