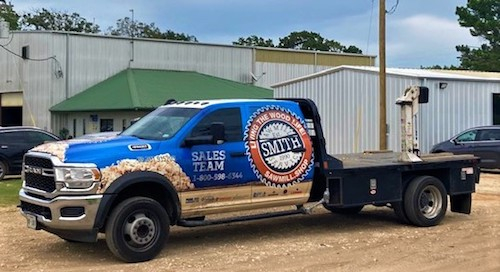 July 22, 2022 - A news release on June 15, 2022 announced that BID Group of Canada had entered into an agreement to acquire Smith Sawmill Service of Timpson. Speaking to the July meeting of the Timpson Area Genealogical and Heritage Society last Wednesday, Paul Smith, former CEO of Smith Sawmill Service recalled how he went from being a THS student sharpening saws for local sawmills part-time in the early 1970s to the owner of  one of the largest companies of its type in America. With customers in a number of foreign countries, Smith Sawmill Service will have sales of over $30,000,000 in 2022.

“I'm the son of Bobby and Tommie Smith and I grew up in Timpson," Smith began. “My daddy worked for Tyer Lumber Company, which is now Nix Forest Industries, when I was a boy and I became familiar with sawmilling through him. I would visit Dad at work and he would take me down to the filing room, where he taught me how to sharpen a saw. I had to stand on a coke bottle crate to be tall enough. When I was in high school, Leonard Tyer paid a saw sales rep named James Grey to teach me some of the finer techniques in saw sharpening and I learned a lot from him. He always had on a shirt and tie and he could throw his tie over his shoulder and work on a saw and not get dirty. I never learned how to do that.” Smith chuckled.

“I made good money in high school sharpening saws for mills part-time and I continued doing it full time after I graduated. I'd spend most of the day going to sawmills to pick up and deliver saws and then sharpen them at night for delivery the next day. Sometimes the only sleep I got was a couple of hours in my truck,” Smith told. “In 1990 I started Smith Sawmill Service in my parents' garage. I had to raise the garage door to have enough room to operate the sharpening machinery. In 1994 we moved out to our present location on Highway 59 South. There was a 50' by 75' metal building and a house there. I was reluctant to go into debt to buy the property but my Dad told me my business could never really grow until I had a good place to work, instead of a garage. So, I bought the place and Dad lived in the house. In 1995 we replaced our old manual grinder with a state-of-the-art automatic grinder. We might have had only one grinder, but it was as fine as anyone else had,” Smith added. 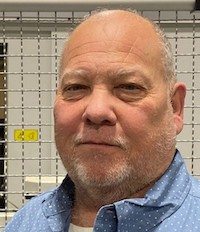 “In 1997, my wife Debra left teaching and joined the company full time running the office and doing our books. In 1999, Debra's father, Robert Pate, retired from Nibco and went to work for the company. He has since retired from Smith Sawmill Service but still frequently works there. A few years later, I had back surgery and couldn't work for six months, so Debra and Robert ran the company while I lay in the bed and told them how to fix saws and set up equipment over the phone. Our customers never knew that I couldn't work during that time,” Smith confided.

"I believe in 'Fake It Until You Make It' and that is how we made it through the tough times. We were so broke and have been so close to bankruptcy so many times. Debra says 'Paul you were so good at hiding the fact that we were completely broke until we pulled out of it.' One time when we had about 30 employees, an IRS agent came down with the intent of putting a padlock on the door and shutting us down. But I pleaded with him and told him 'I believe in the American Dream. We're gonna make it! Besides look at all the interest we pay you! You should be happy!' He believed me and let us stay open,” Smith shared. “In fact, I once delivered a check for more than $400,000 to the IRS office in Longview. That was during the Iraq War and when I handed it to him I said 'This ought to buy a few bombs.' He didn't think that was funny at all.”

“Government and insurance type people have no sense of humor and that has gotten me into trouble more than once. An insurance inspector had an appointment with Debra one morning and she was running late so he said to me 'You run the company. I'll just get you to answer these questions. First, do you   drug testing?' I said 'We sure do! Every morning at nine o'clock everybody comes in here and puts their drugs out on the table and we try 'em out' He didn't crack a smile. He closed his briefcase, stood up, and headed for his car. I followed him out into the parking lot, trying to explain that I had been joking but he wouldn't listen," Smith laughed. “It took Debra eight months to get them to come back out to see us, so after that I was not allowed to talk to any government or insurance people!"

In 2001, as the result of  the reluctance of some large customers to do business with a family operation, Smith Sawmill Service registered a trademark for their products, Accurate Cutting Technologies, or ACT. This allowed others to re-sell Smith products as a brand name.

“We still use the ACT brand some but over the years people have come to know and rely on Smith Sawmill Service as a family business and that is what we go by. I thought BID Group would probably change the company name when they acquired us but they said Smith Sawmill Service is known and respected worldwide in the industry and there is great value in that,” Smith said.

“We received our first patent in 2003 for a conical chipping head. A manufacturer whose products we sold notified us that they were cutting our wholesale discount from 20 percent to 15 percent. We discontinued selling their product as a result and invented our own. In 2005 we patented an adjustable blade for chippers which has been picked up by other manufacturers who now pay us royalties for our patent”.

“In 2006, Paul Mullins went to work for us and we started rebuilding chippers. We didn't have room to work on them inside so we rebuilt them outside in the hot sun. One day I received a call from a mill asking when we would be through with their chipper. I replied that their chipper was finished and was in the paint booth. When I hung up Paul rolled his eyes and said, 'You know we paint those things outside in the grass!' That soon was no longer the case, though. We built a paint booth later that year with an overhead crane so we could move stuff around with the push of a button,” Smith explained.

“When we bought the original building it had a little office in it and we used that until we outgrew it. We brought in a little job trailer and used that for offices for a while and later set up a full size trailer out front as our offices. Debra had wanted a nice office for a long time but I hate borrowing money and every time we had a little cash built up, I would buy some equipment or add on to the shop. Finally, she came to me one day and said, 'I know you have some money set aside to buy some equipment, but if you don't use it to build me a nice office, I'm going home and I'm not going to come back!' So we built an office!” Smith laughed. “Debra had three requirements for the office and we met them all. First, it had to be cold enough to hang a hog in. Second, it had to have enough light to do surgery in. Third, it had to have the latest technology. In fact, the contractor who built our offices said that a person would have to go to Houston or Dallas to find that level of office technology.”

“In 2016 we brought my son Michael in and pretty well handed the business over to him. We were doing well and I just let him run with it. I'm a pretty conservative person and don't like getting out of my comfort zone, but Michael had big ideas and began growing the business. We wouldn't be nearly as big as we are today if Michael hadn't taken over,” Smith declared. “Michael is a hands on type of person. He loves being out in the shop and going out to meet customers but he hated the office and that became the weakest part of our business. So Michael brought in a friend of his, Dustin Norris, to take over the office and it has worked out great. Our growth has been unbelievable! Sometimes I've had to step in and hit the brakes a little because we didn't really have the money to do some of the things they wanted to do at the time, but they have done a wonderful job." 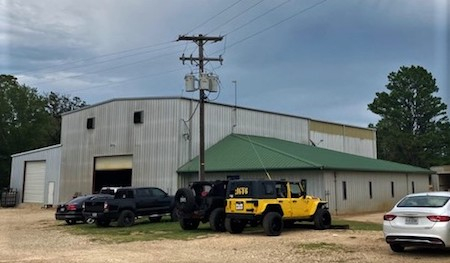 “In 2018 we added a second location when we bought a Shreveport competitor out. They approached us about buying them and I didn't think we could afford it but the owner said 'Nope, I'm coming down and we're going to make a deal. Sure enough, at that meeting we closed the deal and it was a really good deal for us. It has been a great fit because the two operations complimented each other,” Smith said.

By 2018, Smith Sawmill Service was the largest independently owned primary circle saw manufacturer in North America. That year we added our first robot machine. It fills a whole room and after you get your saws hammered and tipped and ready to grind, you just stack them on top of each other, roll your cart into the machine, program it, turn off the light, and go home. The next morning they're all sharp and ready to go. It's amazing!” Smith explained. “We have two of those machines now.”

“Smith Sawmill Service put the first online sawmill store on the internet in 2020. Sawmill operators can go online, see our products, and order what they need just like anything else. We offer everything from small parts to a $40,000 mill. It has worked out very well for us,” Smith shared.

“In 2021 we added our third location in North Carolina. I had met the owner a couple of years before at a convention in Las Vegas and he asked if I might be interested in buying his business and I said I would. Two years later the phone rang and it was that man saying 'Okay, I'm ready to sell you my business.'  I knew I didn't have the guts to spend that kind of money, but I knew two boys who did, so I bought Michael and Dustin plane tickets to North Carolina and when they got back we had a third location,” Smith said. “It has worked out really well. Also that year, my grandson Triston Smith came back to Timpson and joined the company. He now does all the purchasing for all three locations of the company plus he presented us with our first great-granddaughter about 18 months ago.”

I'm pleased that Michael, Dustin and Triston have all agreed to stay with the company under the new ownership. I will stay with the company for three years as sort of a good will ambassador. I've been broke all my life because we put everything we made back into the company but that all changed a few days ago! Bankers wouldn't even talk to me in the early years of our company but that is no longer the case. I truly hope the business continues to prosper to the degree that in a few years I'll be sorry I sold it,” Smith concluded.