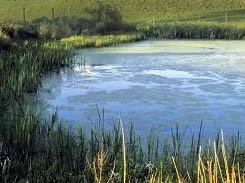 October 13, 2020 - Ponds can be a complex ecosystem. Certainly its an system that we can’t figure out (many times) by simply looking at the surface of water.

One of the questions I’ll get occasionally is about the “oily” look or perhaps foam that is on top of the farm pond water. “Doesn’t that mean we have an oil/gasoline/petroleum spill from somewhere?” Though it could be, there are some very organic, natural processes that cause slimes, foams, and “sheens” on ponds.

A surface film results anytime when insoluble substances enter the water. These substances come from a variety of physical, chemical, or biological sources.

Pollen and atmospheric dust are common causes of surface films. Pine, oak, and other pollen in the spring can accumulate. Its common that spring showers wash pollen into ponds where it floats and forms a yellow-green surface film that will dissipate within a few weeks.

Films also are formed by the growth of certain kinds of blue-green algae. This can be quite toxic to livestock and is a particularly bad form of algae to have in a pond. Films formed by blue-green algae are usually bright green and form swirls and bands as they move over the pond with the wind. On rare occasion the pond may develop a bright red or blood red film which is the result of the growth of "red algae."

The third source of a “film” is from hydrocarbons and oils. Oils are produced naturally by the decay of leaves, algae and organic matter, but these oils behave differently from cooking oil or motor oil. To determine if the oil sheen you see on your pond is from a natural organic source, poke it with a stick. If it is from the decay of leaves and other organics, it will most likely crack and shatter like a thin layer of glass and will not reform as the stick is removed. If it reforms or does not shatter, it is likely from automotive or cooking oils that have washed into the pond.

Lastly, surface films may be the result of insoluble compounds in the soil. Soil-based films usually accompany muddy water, are similar in color and will dissipate as the muddy water clears. Eliminating the cause of the muddy water will usually eliminate this type of surface film.

Very little can be done to remove a surface film. If it is biological in origin (pollen or algae), it usually will dissipate or biodegrade on its own within a couple of weeks. If the film is the result of soils and muddy water, the problem may persist until erosion can be stopped or the source of the muddy water is eliminated.

Foams that form on the surface of stormwater ponds may be the result of illicit discharges of soap or they can be formed naturally, usually in association with algae blooms.

All plant cells contain natural surfactants that change water surface tension. After an algae bloom occurs and the algae begin to die, their cells rupture and release these natural surfactants into the water. Add some current or wave action to this mixture and this water can begin to form a froth or foam.

If you’ve noticed this on lakes and the ocean, this is the most common reason. Natural foams also form in water with a lot of organic matter such as in black water rivers and swamps. All of the leaves and woody debris that fall in swamps decay and release their natural surfactants into the water.

Ever notice the foam on freshly brewed coffee? Yep, it’s the same kind of natural oils!

Another way to tell them apart is to look at the individual bubbles in the foam. Soaps are more efficient surfactants so they can create larger bubbles, so bubbles in soapy foams often are large and of variable size. Natural foams cannot create large bubbles easily, so they tend to have small bubbles that are more uniform in size. Last, soapy foams are able to disperse easily, so they often spread out from their source. Natural foams do not disperse as well, so they tend to stay close to the source.

Slimes are usually the result of biological activity in the pond. They often are formed by the growth of algae or microbes at the water's edge or on the bottom in the shallow areas of the pond. These types of slimes are most often green or black, and are familiar to most pond owners.

So, be it a slime, foam, or sheen on top of your water, all of these conditions are certainly organic and can be a natural part of the cycle of your pond’s ecosystem.