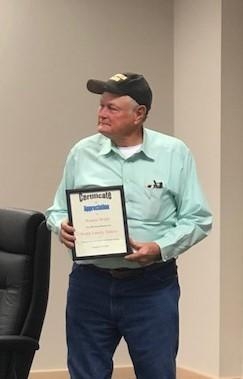 January 31, 2022 - Most people know what share-cropping was but few can talk about it from personal experience anymore. Former Timpson City Councilman and high school teacher Ronnie Wolfe can, though. Speaking at the January meeting of the Timpson Area Genealogical and Heritage Society, Wolfe said “From the time I was born until 1966 share-cropping was all my parents did.” Describing the life of a share-cropper, Wolfe quoted his former THS student Burt Hairgrove when he said, “It was real and it was fun, but it wasn't real fun.”

The Emancipation Proclamation and the defeat of the Confederacy in the Civil War ended slavery and the plantation system of agriculture in the south, Wolfe explained, “You can't talk about share-cropping without talking about cotton.” He said, “because cotton was the major crop produced in the south. Growing cotton was very labor-intensive and after the end of the war the south had huge plantations with no labor and a huge labor force with no jobs, so share-cropping was created. Since the labor force had nothing, the landowner had to furnish housing, clothing, food, animals, and equipment to the share-cropper. In return, the landowner got a portion of the farmer's crop, usually about half. This wasn't the best of systems but it gave laborers jobs and housing and allowed the production of cotton to resume.”

“My daddy, Marvin Wolfe was born in 1895, and he had known some of the former plantation owners in this area," Wolfe continued. “His father came to Texas after the Civil War and settled out at Rose Hill. Our family used the German spelling of “Woolfe” until WWI when anti-German sentiment forced us to change it. Judge Hooper owned a league and a labor of land in that area, which totaled 4605 acres, upon which many share-croppers lived. The Great Depression brought an increase in share-cropping as many small farmers lost their land to foreclosure and were forced into share-cropping,” Wolfe explained. “My parents married in 1931, right in the middle of the deep depression, and started share-cropping. They farmed with my grandfather for about a year and then moved out onto the Todd farm, which had been part of the Hooper Plantation before the Civil War. They lived with Tom and Lucy B. Todd until the Todds lost the property to foreclosure. Then they farmed with Joe Collins, who had twenty-two acres, and later on the Grey's place, between 1970 and the Gary Fire Hall. When WWII broke out my uncle, Bud Thompkins, left to work in the shipyards on the coast and they farmed on his place. On a cold February morning in 1946 I was born, and I was born into share-cropping. I was plowing behind a mule when I was five years old,” Wolfe said.

My Uncle Bud returned to his farm in 1946 with the end of the war and took his place back, so we moved in with my grandmother out behind the Mount Bethel church and farmed there 'on a third and fourth' which means the landowner furnished the house and got a third of the corn and a fourth of the cotton. If we could get a bale of cotton off an acre we were doing good. Cotton was the money crop but corn was the feed crop. The corn fed the animals and us. Meat-wise, we ate chickens and we cured two hogs a year. There are two methods of curing pork but we salt-cured ours. Salt is an astringent and it pulls the water out of the meat. We had a smokehouse but you have to have cold weather to cure meat. You can also sugar-cure meat. I started hunting when I was twelve years old. Squirrel season was October 1 to January 1 and maybe a little more. I still love squirrel. I shot two in my back yard the other day because I was hungry for some. I called the school and told them not to shut down, it was just me shooting a couple of squirrels in my yard!” Wolfe laughed.

In the 50s and 60s small cotton farmers were forced out of the market by large growers, who could afford mechanized picking machines that smaller growers couldn't, continued Wolfe. “I think we were probably the last ones share-cropping in Panola County. Tomatoes replaced cotton as the primary cash crop for the small farmer. We grew two acres of tomatoes a year and they are what got me over the hump at SFA. An acre of tomatoes is five thousand plants and it takes an ounce of seed to grow an acre of tomatoes. We grew them in a hotbed, then put them in a cold frame, and then put them into the field. Then we had to pick them. It's labor intensive. My job was to carry them out of the field, two bushels at a time. My daddy said 'You ought to tip your hat every time you see a tomato plant.' I asked why and he said 'They sent you to college, didn't they!'" “We grew Homestead tomatoes, and later on they came out with the Homestead 24 and later with the Homestead 500. But let me tell you, if you want to grow tomatoes now, I've found a new variety last year: Super-fantastic Hybrids! You won't be disappointed! Those things produce like crazy! I still love to farm. I can't eat all I grow and am happy to give it away. I have learned that if you will plant a row of marigolds right along side your tomatoes, you won't have a problem with bugs. I haven't put any insecticide on my tomatoes in years. It works.”

“I learned a lot of stuff share-cropping,” Wolfe continued. “I learned how to split shingles, I learned how to hew logs with a broadaxe.. I built a house down in the Sabine River bottom in 1976 with R.M. Nugent. We hewed the logs and notched them up. I wouldn't have learned that somewhere else. Mostly it was just survival skills. If something broke, you had to fix it. One morning about nine or ten o'clock Daddy came home from the field and Mother sked him what he was doing home. He said he had broken the tongue out of his row disk. She asked him what he was going to do and he said 'I'm going to make me one.' He went out and cut down a little pine tree and used an axe to hew it up. By noon it was finished. He ate lunch and then went back to the fields. That was the mentality we had.” 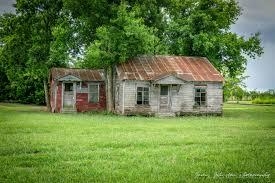 “We moved around a lot. Since we were share-cropping, we didn't own the land we farmed or the house we lived in. Daddy never cared much about the house, as long as it didn't leak. He wouldn't live in a house with a leaky roof,” Wolfe continued. “It had to have good water, though. We had to find somebody to move us because we didn't have a way to move. We didn't have much to move anyway. We had a wood cook stove, four or five dining chairs and a kitchen table, and our beds. Our farm implements were the biggest things we had to move. We lived in one house that had about nine coats of wallpaper on it and every time somebody new moved in they would put on another one. The first layer of paper had come unglued from the wall so when the winter wind blew, the walls would breathe in and out several inches,” Wolfe chuckled.