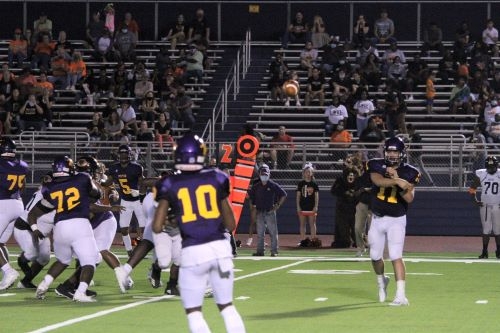 The Center Roughriders and the Gladewater Bears battled back and forth throughout an explosive 41-40 Roughrider’s win Friday at Center’s Roughrider Stadium.

Center scored first with a 43-yard Keamodre Horace touchdown run with 10:21 left in the first quarter. The Bears bounced back with 5:06 minutes left in the opening stanza when Gladewater receiver DJ Allen pulled down a 15-yard touchdown reception. The Bears converted a two-point attempt and they  led 8-7.

Gladewater took a 14-7 with a touchdown keeper run by Tristan Holmes with 9:42 left in the second period. The Bears later expanded their lead to 20-14 by half time.

Center came back to tie the game 20-20 near the start of the third quarter, after a Gladewater turnover and another explosive run by Center’s Horace.

The Roughriders came back with less than a minute left in the third quarter on a Horace 87-yard touchdown run to put Center up, 27-20.

Horace scored again twice in the fourth quarter to help gain the win. By the time the smoke cleared at the end of the contest the fans saw each team hold the lead at least three times and they saw the game tied four times as well.

The Roughriders are scheduled to host the Chapel Hill Bulldogs next Friday September 18, 2020 for this year’s CHS homecoming game. Kickoff will be at 7:30 p.m. The Bulldogs are 3-0 for the season and beat visiting Terrell last week by a 51-42 score.