Roughriders Fall by 51-28 Score to Bulldogs 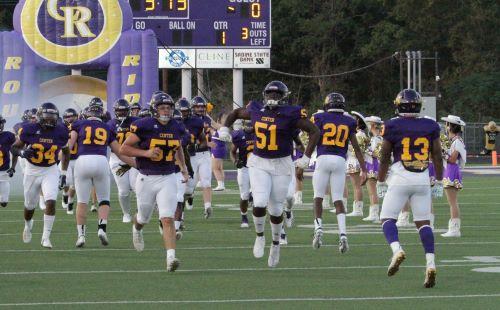 The Center Roughriders Varsity Football Team has fallen to 1-1 overall this season after they lost their first home game to the Jefferson Bulldogs on Friday by a 51-28 score.

The two teams combined for ten turnovers during the contest which gave each team a shorter path to the endzone and ultimately led to a high scoring affair. Although the overall game saw plenty of scoring, neither team got on the scoreboard until there was just 3:39 minutes left in the first quarter when Bulldog quarterback Kylan Thomas found Chris Shepard for a 29-yard touchdown completion. Landon Fuquay added an extra point kick to give the Bulldogs a 7-0 advantage.

Center got a fumble from Jefferson at the beginning of the second stanza and the ‘Riders Keamodre Horace scored on a 44-yard touchdown run with 11:36 remaining in the first half of play. Alexis Lopez added an extra point kick which tied the game at 7-7.

Jefferson regained the lead at the 5:21 mark of the second period when Kylan Thomas broke free for a 21-yard touchdown. The Bulldogs took a 14-7 lead into the halftime intermission.

Bulldog Travon Johnson scored on a 3-yard scamper which gave the Bulldogs a 20-7 advantage after a failed extra point attempt with 8:37 in the third stanza. Three minutes later, Bulldog Dee Black picked up a fumble and raced in to give Jefferson a 27-7 lead.

Center continued to fight and cut the JHS lead to 27-14 after Jakerrion Watson pulled down a 12-yard touchdown catch from Jake Hanson with 4:43 left in the third quarter.

Jefferson got a 1-yard touchdown run from Dee Black early in the fourth frame and they led 34-14 until Horace added his second scoring run of the game to Center’s tally. This cut the Bulldogs lead to 34-21 with 6:49 left in the game. Disaster struck the ‘Riders moments later when Black raced 101 yards on an electrifying kickoff returned for a touchdown which gave Jefferson a 41-21 advantage.

Horace added a 3-yard score for Center with 5:22 left in the game to pull Center to within 41-28 but Jefferson’s Kylan Thomas scampered 43-yards on the first play from scrimmage to extend the Bulldog’s lead to 48-28 with 5 minutes left in the contest.

Jefferson recovered an onside kick on the ensuing kickoff and Fuquay later kicked a 37-yard field goal which proved to be the last score of the night.

The ‘Riders had 8 penalties with 75 yards accessed. The ‘Dogs had 6 penalties for 60 yards.

Head Coach Scott Ponder and the Roughriders will regroup and get ready to host the Gladewater Bears at Center next Friday, September 13, 2019 at 7:30 p.m. The Bears lost to Atlanta on the road by a 35-28 score. Both teams overall record stands at 1-1 for the season.