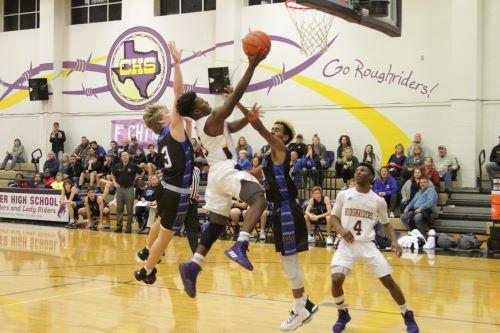 The Center ninth grade team led just 29-25 in the final two minutes of the fourth quarter but they went on an 8-0 scoring run which gave them a 37-25 win at the conclusion of the contest.

The Roughriders Junior Varsity led the Blue Devils by only 17-16 at half. The two teams saw the game tied at 26-26 by the end of the third stanza. Central Heights outscored Center 9-7 points in the final quarter to take the 35-33 win.

In varsity non-district action Center got three early buckets from Jumarcus McCollister which helped them take a 13-8 lead over Central Heights by the end of the first quarter. The Blue Devils cut the ‘Riders lead to just four points by halftime and the third period started with Center ahead 23-19.

Center’s Makel Johnson got hot shooting in the second half and helped the Roughriders build a 36-30 lead by the end of the third frame. Johnson eventually led the ‘Riders for scoring on the night with 20 points followed by teammate Jumarcus McCollister with 12.

The fourth quarter saw Center outscore the Blue devils 17-12 during the final frame. The ‘Riders took away a 53-42 win which moved their early season record to 5-6.

The Roughriders are coached by Hiram Harrison and they play next in a tournament at Central Heights this weekend and JV will travel to a Nacogdoches tournament. The Riders play Pleasant Grove at home on January 13th.