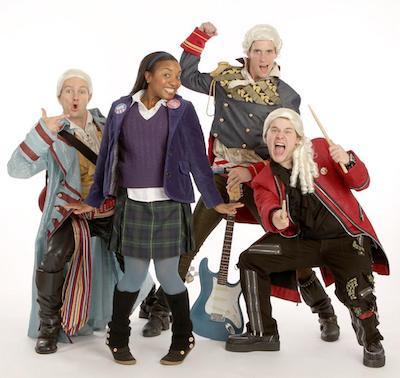 Two performances of “We the People” on Friday, Jan. 31, in Turner Auditorium on the SFA campus will bring American civics lessons to life. The musical revue is a feature of the Children’s Performing Arts Series, presented by the SFA College of Fine Arts.

January 22, 2020 Nacogdoches – The Children’s Performing Arts Series at Stephen F. Austin State University will present two performances of TheaterworksUSA’s “We the People” on Friday, January 31, in W.M. Turner Auditorium on the SFA campus.

With the U.S. presidential campaign in full swing, it's the perfect time to make learning about democracy fun and accessible, inspiring students to get involved and make a difference. Through rock, R&B and hip-hop, this musical revue covers the three branches of government, the First Amendment and more.

“We The People” features a book by Joe Iconis and songs by Brad Alexander and Kevin Del Aguila; Eli Bolin and Sam Forman; Joe Iconis; Tommy Newman; Ryan Scott Oliver; Adam Overett; Erik Weiner, Mark Weiner and Jordan Allen-Dutton. Based on a concept by Alex Timbers, the show was originally directed by Gordon Greenberg and choreographed by Michele Lynch. Orchestrations are by Greg Pliska; set design is by Adam Koch; and costume design is by Lora LaVon. The show targets children in third through eighth grade.

Presented by the SFA College of Fine Arts, the Children’s Performing Arts Series annually features five shows designed to entertain, educate and engage young audiences of all ages, according to Peterson. Study guides provide suggestions for pre- and post-performance activities and discussions for teachers to use in the classroom. A comprehensive study guide for “We the People” may be accessed at cpas.sfasu.edu.

Other upcoming CPAS performances this season include Super Scientific Circus on Friday, Feb. 28; and “Cinderella” on Tuesday, April 28. To order tickets, call (936) 468-6407 or (888) 240-ARTS. Visit the CPAS website at cpas.sfasu.edu for additional information.