March 19, 2020 - For the first time since 2006, the Stephen F. Austin State University Bass Fishing Club has won the Abu Garcia College Fishing National Championship. The competition was held Feb. 26 through 28 on the Harris Chain of Lakes, part of the Ocklawaha River basin in Central Florida. This is the third national championship victory in the club’s history.

On Feb. 28, marketing sophomore Ethan LeGare of Dallas and marketing junior Hank Harrison of South Padre Island weighed in the biggest bag of the day at 20 pounds, 8 ounces, giving them a total weight of 56 pounds, 5 ounces. They beat the Sam Houston State University team by an ounce. 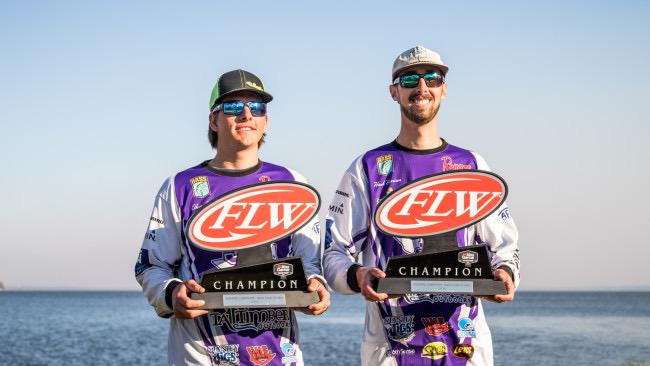 In addition to the trophy, LeGare and Harrison won a $33,500 prize package, including a new Phoenix 518 Pro bass boat with a 115-horsepower Suzuki outboard.

The SFA team members also qualify as professionals for the 2020 Toyota Series Championship Nov. 5 through 7 on Lake Cumberland in Burnside, Kentucky. The championship awards $235,000 for first place.

LeGare and Harrison caught their fish by targeting grassy flats on points next to spawning pockets in Lake Beauclair, Lake Dora and Lake Eustis.

“The key to winning was adapting to the changing weather conditions and being versatile with our bait selection,” LeGare said.

On the first day of the competition, the SFA team took advantage of the barometric pressure being at its lowest point of the week due to a cold front moving in that night.

“The conditions on days two and three were tougher, but we slowed down our approach to the fish we were catching,” LeGare said. “With the barometric pressure being high on days two and three, slowing down and changing up our baits were key strategies to getting our fish to bite.”

The reservoirs and lakes near SFA helped the team gain the experience they needed to be flexible during the competition. Harrison added that the main reason he chose to attend SFA was to fish.

“I’ve always loved East Texas, but to have Sam Rayburn Reservoir and Toledo Bend Reservoir both within an hour from campus, I was sold,” he said. “Both of these lakes are consistently rated as some of the best in the country, and Sam Rayburn is in the running for the best lake in the world by Bassmaster Magazine.”

Because of these two reservoirs, as well as the numerous small lakes nearby, “There’s no better place to go to school and expand your skills as a fisherman than SFA,” Harrison said.

For more information on the SFA Bass Fishing Club, email Dr. Eric Jones, professor in SFA’s Department of Kinesiology and Health Science and the club’s faculty sponsor, at jonesej@sfasu.edu.