October 21, 2019 - Tex Ritter and Jim Reeves, two of the most important names in the history of country music, were both from Panola County, so it seems fitting that the Texas Country Music Hall of Fame and Tex Ritter Museum should be located there. Established in Carthage in 1998, the Hall of Fame recognizes Texans who have made major contributions to country music and the museum displays a wealth of Tex Ritter artifacts and memorabilia, as well as that from other country artists. 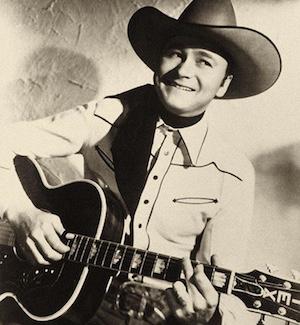 “When I went to school to learn to be a Chamber of Commerce manager I learned that the first thing you need to do to attract tourism to your community is find something that is unique about your town and that no can take away from you and one else can brag about,” said Tommie Ritter Smith, President of the Texas Country Music Hall of Fame/Tex Ritter Museum, who also serves as President of the Panola County Chamber of Commerce. “In Carthage that one thing is that both Tex Ritter and Jim Reeves were born in our town,” she added. “When we decided to establish the museum, my first call was to television and movie star John Ritter, Tex's son, to tell him of our plans to establish the museum to honor his father. The family told me they would love that and they had a warehouse full of things that had belonged to Tex Ritter,” Mrs. Smith said. “I made a trip to California and met with Tex's sons John and Tom and their lawyers and made a deal with them to loan the collection to us. In about three months we had a warehouse full of stuff delivered to the old First National Bank building, which was empty at the time. Volunteers inventoried and cataloged the items and an insurance company appraised it.

The museum's first location was upstairs from the Chamber of Commerce. It was created and staffed by Bill and Tommie Ritter Smith and a handful of volunteers, she said. “We did very well with it and had a lot of visitors. I realized that there were still a lot of people who loved Tex and were interested in his things”, she told. “When I got to California and was able to view what the family had, I saw that they had everything that Tex Ritter had ever touched! They had every record he had ever made, they had books about him, they had his whole collection of Western folklore books. They had all of his clothes, some of which were Nudie suits. Nudie was a famous tailor who made many of the fancy suits that country artists like Porter Waggoner wore. They had his boots and boxes and boxes of contracts and correspondence,” Mrs. Smith said.

It took about a year to catalog everything in the collection. The Ritter family decided that they would donate all of the items to the museum and take a tax write-off. It now belongs to The Tex Ritter Foundation, with the stipulation that it cannot be sold and if the museum ever closes the collection will revert to the Ritter family heirs. All of John Ritter's children have visited the museum and are pleased with it, she shared. 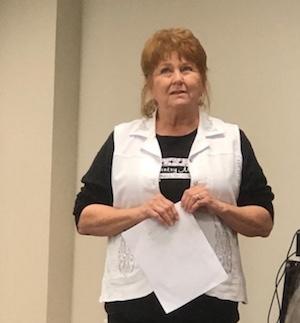 John Ritter also visited the museum prior to his untimely death. “He liked to visit Carthage because he could just be John”, Mrs. Smith revealed. “I always tried to get people to leave him alone and let him enjoy himself, because they never would in other parts of the country.” Sometimes they did and sometimes they didn't. It is now suspected that Tex died of the same hereditary heart condition as John. John's widow, Amy, has visited the museum and donated some of John's things. “We have a John Ritter exhibit and hope to increase it in the near future.”

“Our big weekend is the second weekend of August every year. That is when we have the Classic Country Music Festival and honor the new Hall of Fame inductees. This year we had the Gatlin Brothers perform. On Friday night before the big show on Saturday night, we have the John Ritter Tribute Showcase to help up-and-coming country music stars. We pare it down to twenty-four contestants and have the finals the night before the big show in August. The person who wins gets to represent the Hall of Fame for the coming year and possibly land a recording deal. For the past twenty years we have had a band backing the singers we put together from session musicians from the Dallas area. We call them the Texas Country Music Hall of Fame Band and the artists just love them! T.G. Sheppard liked them so much that he takes them with him when he is touring in Texas!” Smith said. “They are going to perform in with T.G. In Branson in November.”

“I want y'all to know about an upcoming appearance by Hall of Fame member Linda Davis and her family who are going to be at the Hall of Fame on November 16. It will be a dinner theater and we will be serving a Thanksgiving meal. Linda and her family will be performing songs from their Grammy-Award winning album, which will be on sale. Tickets are going fast so make your reservations soon”! Mrs. Smith said. “Check out our website!” 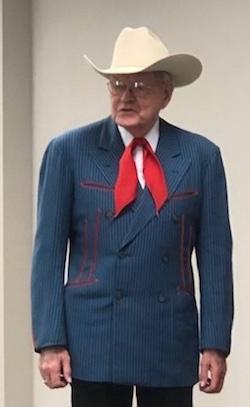 Following Mrs. Smith's talk, her husband Bill Smith, the bass singer for the Calvary Boys sang several Tex Ritter songs. He revealed that he was wearing the coat of a custom Western suit formerly owned by Tex. “This is a Turk suit that was made for Tex in the 1950's. Turk of Hollywood was another famous tailor of Western stage wear like Nudie.” Bill opened with “Welcome to My World”, written by Hall of Fame member Ray Winkler, which was a hit for Jim Reeves. He followed with the Tex Ritter hit “Tenaha, Timpson, Bobo, and Blair”. Bill revealed that when Tex was signed by Columbia Records in 1943 he was their first “singing cowboy” but in 1945 he became the first country artist to have the Number one, Number Two, and Number Three records on the Billboard charts at the same time. One of those songs was “New Moon Over My Shoulder”, which Bill performed. He closed with Tex Ritter's most famous song, “High Noon”, from the film of the same name, which won an Academy Award for Best Song. 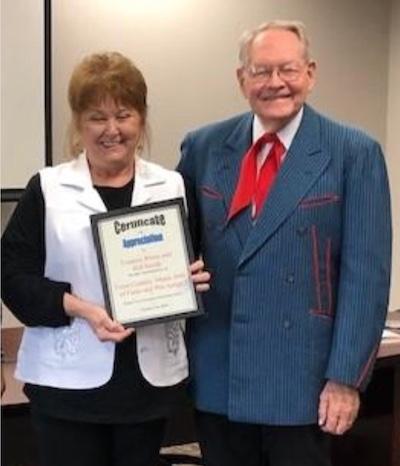 The Timpson Area Genealogical and Heritage Society meets on the third Wednesday of each month at 2PM in the Meeting Room of the Timpson Public Library, located on the corner of Austin and Bremond Streets in downtown Timpson. The public is invited.