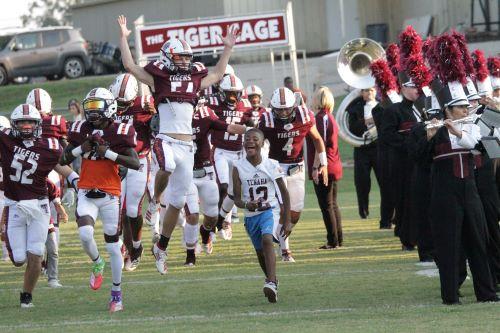 The Tenaha Tigers varsity football team suffered a tough District 11 2A loss at home to the Beckville Bearcats by a 35-28 score. This game was Tenaha’s second loss of the season and dropped their conference mark to 1-1. The Tigers season record is 4-2.

Tenaha deferred the kickoff after winning the coin toss. They dodged a bullet when a Bearcat 31-yard field goal attempt sailed wide with 8:30 left in the first quarter.

The Tigers could not gain a first down on their first possession and punted the ball back to the Bearcats who took over at midfield. Beckville scored on an 8-play drive which saw them take a 7-0 lead after Matt Barr ran into the endzone from three yards out for the score with 3:58 left in the first period.

Beckville stopped Tenaha once again on their next drive and the Tigers punted the football back to BHS with two and a half minutes left in the first quarter. Beckville wasted no time as quarterback Ryan Harris hit Barr for a 35-yard touchdown reception with 1:15 still left in the opening frame. The Bearcats went up 14-0.

Harris found Evan Allen for a second touchdown strike which put Beckville up 21-0 with seven minutes left in the second quarter.

Tenaha got on the scoreboard when Jordan Marshall caught a 16-yard touchdown pass with 4:39 left in the second stanza. Manuel Loredo added an extra point kick to cut the Bearcat’s lead to 21-7.

Beckville punted the ball back to Tenaha with 2:30 left before halftime. The Tigers mounted a scoring drive which saw Michael Hogg come down with a 4-yard touchdown reception with just 18 seconds left before the midway intermission. Tenaha trailed 21-14 at halftime.

The Tigers tied the game 21-21 when Jeremy Patton took control by rushing the football on four straight carries for a touchdown drive which covered 78 yards and was capped off with a 22-yard scoring run.

Beckville regained the lead when the Bearcats completed a touchdown pass on a reverse back to the quarterback who found the endzone. This gave BHS a 28-21 lead with 11:52 left in the final quarter.

The Bearcats executed a 41-yard touchdown strike from Harris to Barr with 8:02 left in the game to gain a 35-21 advantage. Tenaha scored the final touchdown when Hayden Jenkins hit Tray Tutt for a 15-yard touchdown reception with 6:18 left in the contest. This brought the Tigers to within striking distance of the Bearcat with the score at 35-28.

The Tigers recovered a fumble with five minutes remaining but BHS was able to stall their final drive and hold on for the win.

Tenaha rushed for 266 yards on 32 carries. They completed 12 passes on 24 attempts for 103 yards. Tenaha gained 17 first downs and lost a fumble and were intercepted once. They were given 7 penalties for 70 yards.

The Bearcats carried the ball 37 times for 233 yards. Went 4 for 5 on passing attempts for 94 yards. They gained 13 first downs and lost two interceptions and a fumble. They were given five penalties for 35 yards.

The Tigers will enjoy an open bye week for October 11 and will next travel to Harleton High School where they will face the Wildcats on Friday, October 18 at 7:30 p.m.