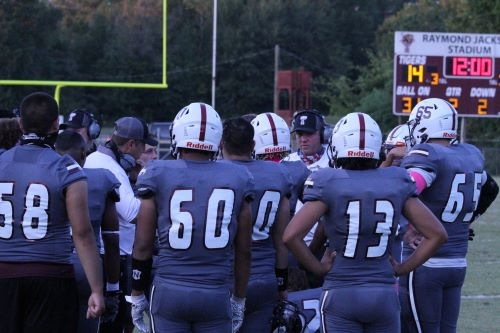 The Tenaha Tigers defeated the visiting West Sabine Tigers varsity football team by a 36-16 score. This win boosted the Tenaha District 11 2A conference mark at 3-0 atop the standings. The THS season mark is now 4-2.

Jeremy Patton got Tenaha on the board with an 8-yard touchdown run with 9:29 minutes left in the first quarter after West Sabine fumbled in the early going. Manuel Laredo kicked the extra point and THS took a 7-0 lead.

A Tray Tutt 22-yard touchdown reception, with 4:18 left in the opening stanza, helped boost the Tenaha lead to 14-0. Patton scored his second touchdown on a 38-yard scoring run with 10:42 left in the second quarter which gave THS a 22-0 advantage.

Tristin Claiborne added another touchdown onto Tenaha’s tally after he scored on a keeper after hitting Tutt on a 61-yard pass which had gotten the ball down close to the goal line. Tenaha led 30-0 at the midway break.

Julius Mason got West Sabine on the board with the only score of the third period, a 50-yard scamper that pulled WSHS to within 30-8 of the Tigers.

WSHS scored with just 2:46 remaining in the contest when Mason ran in from 5-yards out and West Sabine converted on a 2-point conversion run.

Tenaha will travel to Mount Enterprise next Friday, October 16, 2020 for a 7 p.m. kickoff at Wildcats Stadium.