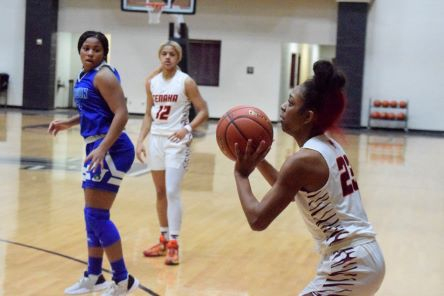 The Tenaha Lady Tigers and the Tenaha Tigers varsity basketball teams each took District 23 2A conference wins over Joaquin High School on Friday. The Lady Tigers defeated the Lady Rams by a 79-27 score and the Tigers beat the Rams by a 69-45 point margin.

The Lady Tigers never trailed and opened up the game with a 9-0 run. THS led 16-2 at the midway point of the first period and they led 23-9 going into the second frame. By the halftime buzzer the Lady Tigers held a 45-16 advantage, and by the conclusion of the third stanza, they were up 68 points to 21.

The win gives the Lady Tigers a 26-2 overall record and an 8-0 district mark. They are currently in first place with four conference games left. The Lady Rams are currently 12-16 overall and 4-5 in the district, they are in fourth place, and could also make the playoffs.

Tenaha was led by Kayanna Cox with 19 points, Mckaelen Reynolds with 15, Kaedynce Cox and I’Tiyanna Dagley each scored 11 points apiece. Joaquin was led by Ka’Maria Wilson with 10 points. 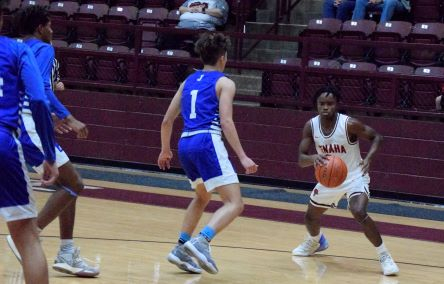 In the boy’s game the Tigers jumped out early. They led 5-2 points midway through the first period and 16-6 at the buzzer which ended the first frame. At halftime THS led the Rams 45-16. THS led 68-21 at the end of the third quarter on their way to the 79-27 win.

Tenaha was led by Ja’Tyrian Moore with 23 points, JT Steadman 15, and Brikelian Kenney added 14 points to the Tigers tally. Joaquin was led by Malik Stotts with 12 points and Cole Bragg chipped in 11.

The Tigers are currently in fourth place in District 23 with a 12-13 overall record and a 3-3 conference mark. Joaquin is tied for sixth place with a 9-11 season standing and a 1-4 conference record. Timpson leads the district at 6-0 with six games remaining in conference action.

Tenaha will next play on Tuesday, January 24, 2023 at Gary Bobcats Gymnasium. JV action begins at 4:30 p.m. and varsity play will follow.

Joaquin will host the Garrison Bulldogs on Tuesday, January 24. JV tips off at 4:30 p.m. and varsity play will follow.