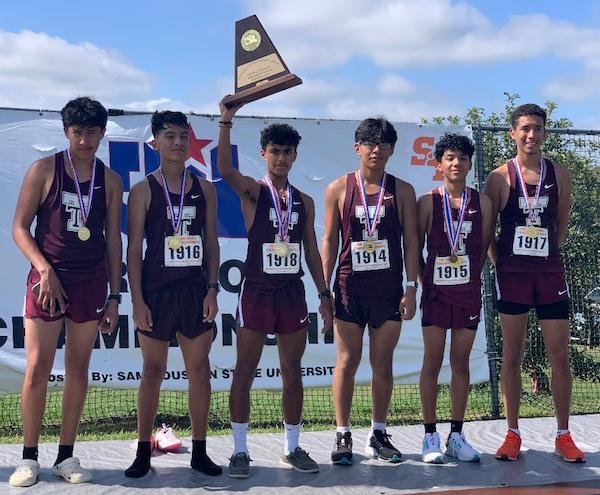 October 28, 2021 - The Tenaha ISD boys cross country team clinched district championship in Shelbyville in mid October and qualified for the regional meet in Huntsville. Junior, Evan Plata, led the way for the team to win a repeat Regional Championship, qualifying for the Cross Country State Championship held in Round Rock on November 6th. The goal was to stay together as a pack, and they crossed the finish line staying ahead of the top 34 boys out of 168 runners. Individual placing for the Tigers were Evan Plata 2nd, Misael Hernandez 6th, Jario Hernandez 13th, Alan Mosqueda 32nd, and Daniel Loredo finished 33rd.

Coach Lauri Sisk stated, “When the season started, this team had high expectations, with the same determination, commitment, and grit as the 2020 team. Last year’s team were mostly seniors, but the 2021 team is composed of mostly underclassmen. This team is young with only one senior, Alan Mosqueda. The goal from the beginning was to bring home another regional championship, and these boys fully dedicated themselves to win. As a young team, it took a lot of grit to win the Regional Championship again. I’m proud of the way this team has stepped up the entire season.”

The Tigers will compete in the UIL Cross Country State Championship at 9:00 am, November 6th, at Old Settlers Park in Round Rock.