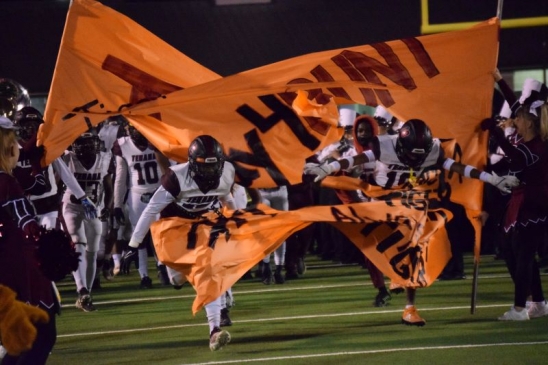 The Tenaha Tigers season ended on Friday with a 17-10 overtime loss to the Chilton Pirates. The Tigers led through most of regulation play until Chilton tied the game with just six seconds to go in the game. The Pirates took their first lead in overtime, and then clinched a 17-10 win over No. 7 Tenaha to seize a huge Class 2A Division II area-round win.

Both Tenaha and Chilton struggled moving the football in the first half and the two teams went into the locker rooms at halftime with THS holding the 3-0 lead.

Patton scored on a 2-yard touchdown run with 2:13 left in the third period. The score capped a 64-yard drive which started with a 38-yard reception by Ja’tyrian Moore from Tristan Claiborne. Loredo tacked on an extra point kick to give THS a 10-0 lead which held up until 8:32 left in the game. Daylon Ford scored the Pirates first touchdown on a 25-yard keeper run. Cesar Sanchez added and extra point to cut Tenaha’s lead to 10-7.

Chilton moved into scoring position late in the fourth quarter. Cesar Sanchez nailed a clutch 21-yard field goal with six seconds left to go and the score was tied at 10-10.

Chilton recovered an onside kick after that score but the play clock expired when their quarterback was sacked on the final play of regulation. This sent the game in to overtime to break the tie.

The Pirates got the ball first in the extra period, and on 3rd-and-goal Luis Fernandez plowed in the endzone for a 4-yard touchdown run and the first Pirate lead of the game. Sanchez’s ensuing extra point kick made the score 17-10 in Chilton’s favor for their first lead.

Tenaha had a chance to answer but disaster struck on the Tiger’s second play of overtime, the Pirates intercepted the ball in the end zone to clinch the win and end Tenaha’s season.

The Pirates (10-1) advance to face their old district rivals the Bremond Tigers(6-6) in the third round, as both District 10-2A II teams have managed to meet up again in the postseason.