Timpson Faced Off at Tenaha for District Basketball 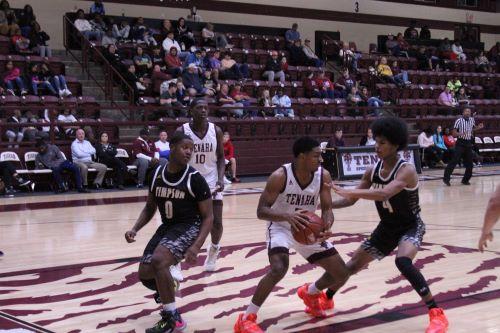 The Timpson Lady Bears and Bears traveled east last Tuesday for District 22 Class 2A games with the Tenaha Tigers.

Tenahas’ boys junior varsity basketball team led 57-21 at halftime and went on to win by a 69-30 score over the Bears.

Two 3-pointers in the third period from Lucy Giles helped the Lady Tigers cut the Timpson lead from 17 points to just 12 with a 43-31 score.

Tenaha cut the lead more in the final quarter but the Lady Bears held on for a 9-point (50-41) win.

Brylee Behrens led Timpson with 15 points, Jaycee Campbell 12, and Harlie Ware had 11. Tenaha was led by Jonisha Thompson with 16 points and Lucy Giles with 12.

Boys varsity action saw the Bears lead the Tigers early on by a 5-0 margin. Tenaha tied things up at 5-5 with 2:38 left in the opening period but Timpson took a 10-8 lead by the end of the first stanza.

Duece Garrett exploded for fourteen points in the second quarter to help Tenaha lead with a 27-19 point lead by the midway break. Garrett would lead all scorers with 32 points for the day.

The Tigers took control in the second half. They led 58-28 at the end of the third period and eventually won by a 77-45 score. Trindon Claiborne helped the Tigers with 19 points, JJ Patton had 11, and Mike Hogg 10.

The Bears were led by Shykeem Washington with 11 points. Timpson will host the San Augustine Wolves on Friday, January 10, 2020 with junior varsity action starting at 4:30 p.m. Varsity play will follow.

The Tigers will travel to Martinsville with JV tipping off on Friday, January 10 at 4:30 p.m. Varsity action will follow.