August 23, 2021 - It isn't clear whether the Williams family or statehood came to Texas first, but both occurred in 1845. Speaking at the August monthly meeting of the Timpson Area Genealogy and Heritage Society, Tommy Lee Williams, a 1965 graduate of Timpson High School, related how his family came to Texas and their long history in Shelby County.

“It seems like South Carolina is where poor boys got off the ship” Mr. Williams began with a smile. “John B. Williams was born about 1790 in South Carolina and grew up there but later drifted down to Georgia and then to Florence, Alabama, where he is listed as a blacksmith”, he continued. “As many families did, they continued to move westward and arrived in Shelby County in 1845. They lived in the Jackson community near Joaquin and later near Shelbyville”. Several of the Williams daughters married and settled in Shelby County but Mrs. and Mrs. Williams and the younger children later moved farther west to Anderson County where he bought 1156 acres on the Trinity River. One of the elder Williams sons, Irvin, moved back east to the panhandle of Florida in 1850 and married Nancy Walden, Williams said. He left his family and established farm and and joined the Confederate Army when the Civil War broke out. “He must have been military minded, because he had already named two of his sons General and Colonel!” revealed Williams. During the war Irvin wound up fighting in Virginia and was wounded in the Battle of Chancellorville, where Gen. Stonewall Jackson was killed. After his recovery he returned to Florida in 1864. “The story goes that the family had not heard a word from Irvin since he left to fight in the war. Returning home, he threw his hat in the front door and said “Honey, I'm home!” He now had white hair and a long white beard and was not recognized by his family. “The only break Nancy had from having children was when Irvin was gone during the war” Williams confided. After five years, the Williams's rejoined their extended family in Shelby County. 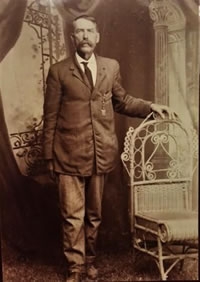 Traveling by boat from Florida to the Mississippi River, the family came north on the Mississippi to the Red River and then into north Louisiana. They traveled overland to the Shelby County community of Toomey, which is now called Arcadia. “Irvin and Nancy had so may kids that I have relatives all up and down the Attoyac” joked Mr. Williams. Their son, General Irvin Williams, known as “G.I.”, rented an existing farm near the community of Rainsville on the old road from Nacogdoches to Buena Vista in 1879, buying it in 1881. “Since it was an existing farm, G.I. had to pay what was a high price for the property, $2.50 an acre”, Williams shared.  A thrifty man, G.I.refused to pay for store-bought tobacco and grew his own, employing his grand-children to pick off the tobacco worms. The property is now owned by Mr. Williams and his sisters, Linda and Beverly, and has been recognized by the Texas Department of Agriculture Family Land Heritage Program. T.L. Williams makes his home on the property.  Located in the Arcadia, Stockman, Silas area, Rainsville had several buildings, a store, a Justice of the Peace, and a County Commissioner. “My great-grandfather, G.I. Williams served as a County Commissioner there from 1906 until 1912,” Williams added. Like Arcadia, Stockman, and Buena Vista, Rainesville declined when the railroad bypassed them to the north in the 1880s. 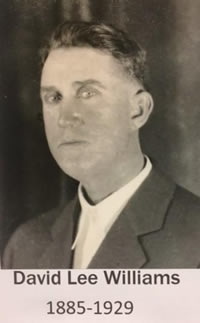 “One of G.I.'s sons, my grandfather, David Lee Williams, married Elizabeth Rhodes and they lived in the community during the early years of their marriage. He was a mail carrier and Justice of the Peace. T.L.'s father, Heber Williams, who was born in 1909, recalled a couple showing up at the family home about midnight on a cold winter night asking to be married. “My grandfather raised the window and told the couple to come up on the porch. As they stood in front of the window he said 'I now pronounce you man and wife and shut the window! I guess he did the paperwork the next morning,” T.L told. A few years later, David Lee decided to move his family to West Texas. “He loaded up his wife and five kids in a Model T and headed to Abernathy, which is up on the caprock, in the high plains, nearly to New Mexico. He ended up with a quarter section of land, a farm, and a general store”. However, David Lee Williams died in 1929 at the age of 44, leaving a widow and five children. T.L's father, Heber Williams, who was 20 when his father died, worked for several years as a ranch hand and cowboy, once participating in a cattle drive from the ranch where he worked to Lubbock, about 65 miles away. T.L. related that his father got up early the next morning and left for home, arriving that evening, a remarkable feat for a man on horseback. “Lizzie” stayed in Abernathy a few more years but eventually returned to Stockman where she had family, as the Depression deepened. 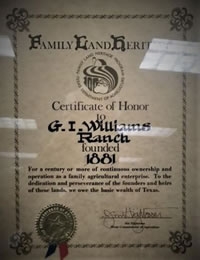 Heber Williams served in the Navy during World War II in the Seabees. He married Florence Franks, a member of another long-time Arcadia-Stockman area family, in 1943.  Returning to Stockman after the war, he became a farmer, raising cotton. T.L. recalls hoeing and picking cotton on his father's farm as a boy. “I remember hoping that the cloud in the sky would get between the sun and me,” laughed Mr. Williams. “Cotton farming in East Texas had pretty much played out by the mid 50's,” revealed Mr. Williams. In an effort to find a replacement for cotton farming, Shelby County Agriculture Agent John Moosberg visited large-scale poultry growing operations in other parts of the country and began promoting the idea that broiler houses could be successful in Shelby County. “I remember us all going down to this big promotion on the square in Center. The main thing I remember about it was that they had free soda water!” chuckled Mr. Williams. The chicken houses benefited small cattle operations because the used chicken litter could be used to fertilize the worn-out cotton fields and produce grass to feed the cattle, said T.L. 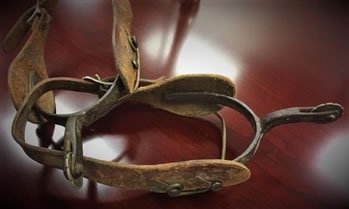 Assisted by his sisters and their husbands, Mr. Williams brought a display of vintage photographs and memorabilia which contributed to his presentation. Among the items displayed was a pair of spurs which Mr. Williams believes were brought to Texas with the Franks family from back east. “These are extremely old. They are not the Spanish-style spurs used in Texas and they are not made of steel. They are forged iron. The quarters were put in later and I had Charles Hughes replace the leather straps”.