October 30, 2020 - Demolition is winding down inside the Griffith Fine Arts Building on the Stephen F. Austin State University campus in conjunction with a fine arts expansion and renovation project that will add nearly 68,000 square feet to the current building.

Phase II of the project – construction/expansion of the building – will soon be underway and is being described by construction officials as “an extensive project” that will start with massive dirt removal, including digging a hole deeper than the current Johnson Coliseum expansion and three times larger.

As a result, motorists and pedestrians in the area should expect construction zone changes that will alter traffic patterns starting next week and continuing for an estimated two years.

Beginning Nov. 3, a construction zone will be established around the Griffith Fine Arts Building that includes the creation of a perimeter fence surrounding the work site. In order to accommodate site preparation and construction, traffic and pedestrian routes in close proximity to the Griffith Fine Arts Building will be impacted. This includes the areas near the intersection of North Street and East College Street, and the parking spaces located along the westbound lane of Alumni Drive. It is anticipated that construction will take up to 24 months, weather permitting. Motorists and pedestrians are urged to use extreme caution in the area, expect minor traffic delays and use alternate routes if possible.

Note the following areas of impact:

The Fine Arts Expansion Initiative will include extensive renovations to the existing Griffith Fine Arts Building and add handicap parking, a patron drop-off zone (off of East College Street) and new construction which will extend the building along North Street nearly to the corner of East College Street. The renovated and expanded state-of-the-art building will include two dance studios, two theatres, a renovated Turner Auditorium and pre-event lobby space, recording studio, sound stage, audio and video editing rooms, an art gallery, multiple classrooms, rehearsal facilities, faculty offices and the offices of the College of Fine Arts dean. The facilities will house the CFA’s sound recording technology, filmmaking, theatre, dance and musical theatre programs.

The anticipated construction will help ease the need for additional space to accommodate continued growth in the College of Fine Arts, according to Dr. A.C. “Buddy” Himes, dean, who has repeatedly stated for many years in his Southern Association of Colleges and Schools’ assessment report: “Only through construction of additional facilities will the College of Fine Arts be able to fully alleviate concerns for space, grow to its potential in enrollment, be competitive with similar programs in Texas, and fully capitalize upon student markets for new programs.”

“Now, this is coming to fruition,” Himes said. “The lesson to be learned is to develop your vision, articulate this clearly for all to see and understand, and never lose sight of this no matter what obstacles may occur.”

Questions or concerns about construction may be directed to the Physical Plant Department Work Control at (936) 468-3206 or the University Police Department at (936) 468-2608. 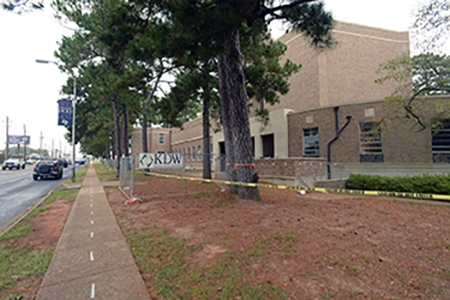 Beginning Nov. 3, a construction zone will be established around the Griffith Fine Arts Building on the SFA campus that includes the creation of a perimeter fence surrounding the work site. 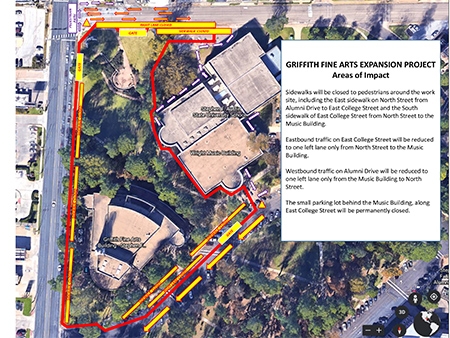 A portion of traffic lanes along Alumni Drive on the SFA campus and East College Street will be affected by the expansion of Griffith Fine Arts Building. (Aerial Map)