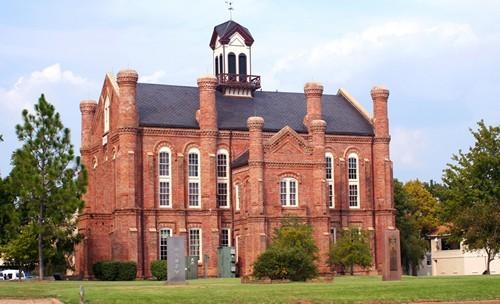 July 23, 2021 - We sometimes fail to realize that things which are familiar to us may be unique to others...even other Texans! This is true of the Shelby County Courthouse. Speaking at the July monthly meeting of the Timpson Area Genealogical and Heritage Society on Wednesday, long-time educator and civic leader Fannie Watson revealed to the audience (including two former students) how this is so.

“We all basically know the story of how the county records were stolen from Shelbyville and taken to Center, so I'll just begin a bit later,” Mrs. Watson began. “Fire destroyed the old Shelby County Courthouse, along with the records, on June 1, 1882. The oldest surviving minutes from the Shelby County Commissioners' Court are from June 6, 1882 and they open with the offer of a $1000 reward for information leading to the arrest of the person or persons responsible for starting the fire that destroyed the old courthouse. The reward was never claimed. The second action taken by the Commissioners' Court that day was a vote approving the erection of a new fire-proof County Clerk's Office,” Watson explained. “The new County Clerk's Office was erected on the site of the current women's restroom on the square in Center by J.J.E. Gibson, who would later design and build the Courthouse itself”, Mrs. Watson continued. “Many county records had to be recreated. People brought in old deeds and documents and those records show the original record's filing date as well as the date it was recreated.”

“The minutes of the Commissioners' Court from Thursday, November 16, 1882 reflect an order that a new two-story brick courthouse be built. The building was to be fifty feet by forty feet and was to have five rooms below and two above, besides the District Courtroom. It was to be covered with slate and with wood floors and doors. There were to be four chimneys and eight fireplaces. This is where the story of the contractor John Joseph Emmett Gibson begins,” Watson said. “Gibson was born on November 4, 1849 in Dublin, Ireland. He became known as “JJE” at an early age. When the rest of his family immigrated to America a few years later, JJE had to be left behind because he had contracted measles and was not able to re-join his family until after he graduated from high school. JJE had studied architecture in Dublin and he worked in the family brick works in St. Louis a few years after arriving in America. At age 21, JJE and a cousin moved to New Orleans and became home builders,” Watson explained. 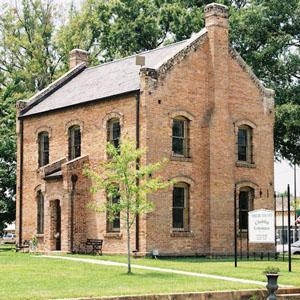 “In the 1870s, JJE moved to Panola, County, Texas, He married Elizabeth Ann Toomey at Woods Post Office in 1875, where I grew up”, Mrs. Watson revealed. On May 16, 1883 the Shelby County Commissioners' Court called for bids on construction of the new courthouse and a jail. “On April 7, 1884 the bids were opened and JJE Gibson's bid of $26,725 was accepted. Payments were to be made to Mr. Gibson as the work progressed. One-seventh of that amount was to be paid when the first floor joists were laid and one-seventh was to be paid when the second floor joists were laid. One-seventh was to be paid when the roof was completed and another seventh when the walls were ready for plastering. The final three-sevenths of the amount was to be paid upon completion of the building,” Mrs. Watson explained.

In the absence of rail transportation and good highways, most of the materials for construction of the courthouse had to sourced locally. “Over two million bricks were manufactured in Mr. Gibson's mill about a half mile from the square and fired in ovens fueled by local lignite coal,” Mrs. Watson shared. Local timber was used for the lumber required. 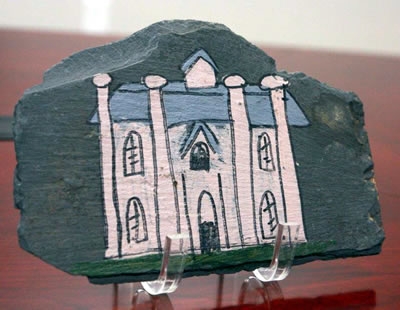 “The original contract called for the courthouse to be completed by August 1, 1885, but because of a labor shortage, the project was behind schedule. Construction continued into the winter of 1884 but when it became bitterly cold, Mr. Gibson asked the Commissioners' Court for permission to suspend work until warmer weather returned, fearing that the brick mortar would freeze before it had time to set. The Commissioners refused his request and ordered him to continue construction. As Mr. Gibson had feared, the mortar did not set properly and one of the exterior walls of the courthouse developed a crack. When JJE reported this development to the Commissioners, he was told to ignore the crack and continue construction,” Mrs. Watson continued. “Descendants of Mr. Gibson have said that JJE regarded the wall as unsound and his conscience would not allow him to leave it up, so he spent $2700 of his own money to tear down and re-build the faulty wall. A great-granddaughter of Mr. Gibson related that JJE said he would never allow children to go into an unsafe building. The Courthouse was finally completed on Feb. 12, 1886 and accepted by the Commissioners. A final payment of $351.58 was made to Mr. Gibson. JJE had lost so much money on the job that he was forced to sell his brick mill and move from Center to Tenaha,”said Mrs. Watson.

“On August 18, 1895, almost ten years after completing the Courthouse, JJE wrote a letter to the people of Shelby County asking that the additional money owed him by the Commissioners Court be paid. He included affidavits from a number of people attesting to the fact that the County owed Mr. Gibson the money. Sadly, JJE was never paid” revealed Mrs. Watson. “Later, JJE built several brick structures in East Texas, including the old Panola County Courthouse and the first brick building in Tenaha. He died in September 14, 1931 and was buried in the city cemetery in Tenaha.”

“The old Shelby County Courthouse is believed to be the only Romanesque style Irish castle courthouse still standing in the United States. The old Courthouse features a secret stairway which would allow the County Judge to escape from the building should he be in danger. There is a ventilation system built into the structure and arch crawl spaces over the windows, the forms for which were found under the building during renovations in 1998. There is earth between the first floor ceiling and the second story floor which was designed to fall and extinguish a first floor fire if it burned through the ceiling,” Mrs. Watson shared. “Even though the original plans called for eight fireplaces, the old Courthouse has twelve. The building's shutters can be hidden inside its walls, a feature found on the Texas Capitol Building and the Governor's Mansion. The cupola on the building's roof was not in JJE's original design and was added later to improve ventilation,” Mrs. Watson added.

“In 1883 the Shelby County School Board had issued a $20,000 bond to the Commissioners' Court to finance the construction of the new Courthouse. The Commissioners failed to repay this debt and in 1937 the Shelby County School Board sued the Commissioners' Court and was awarded $35,000. including accrued interest,” Mrs. Watson said. “In 1969 the old Courthouse was recognized as a landmark by the State of Texas and in 1971 it was added to the National Register of Historic Places”.

A new Shelby County Courthouse was built in 1992 off the square. The old Courthouse had fallen into disrepair but concerned citizens became active to ensure the building's preservation and eventual restoration. “The Texas Department of Transportation's Courthouse Restoration Project had agreed to grant Shelby County $1,100,000 for the building's restoration provided the county could raise $262,000 in matching funds. A press release on October 4, 1996 stated that the county had raised the necessary funds. Williams and Associates was chosen as the contractor for the restoration”. However, if it had not been for the continuing hard work and dedication of community leaders in crossing regulatory and logistical hurdles, the project could not have been completed, Mrs. Watson emphasized.

“The initial phase of the project dealt with the exterior of the Courthouse and the grounds, as well as some of the adjacent buildings. The slate roof had been replaced in the 1980s but the quality of the repair was poor and it had to be re-done. The public shared many historical photos which aided in the authenticity of the restoration. In 1999 the Shelby County Historical Commission was awarded a $52,225. grant from the Meadows Foundation for the installation of an elevator, seating, a portable stage, and sound system. Personalized brick pavers were sold for $50 each to be used in walkways on the grounds to help finance the restoration. The restored Courthouse doors were officially opened to visitors in a ceremony held in July 2000. Representative Jim Turner deliver the keynote address.

Mrs. Watson recalled that in 1998 her third through sixth grade Gifted and Talented classes in Center ISD became involved in the Community Problem Solving Program and had to come up with a community problem to address. Her classes named themselves The Historical Trackers and decided they wanted to help with the Courthouse Restoration Project. They researched Mr. Gibson and the construction of the old Shelby County Courthouse and put together an illustrated book which they had printed in color on high-quality stock and sold at the Fannie Brown Booth Library Book Sale. “This was the beginning of raising $2700 to memorialize Mr. Gibson. We later commissioned a portrait of Mr. Gibson by Texas State Artist Woodrow Foster which now hangs in the Gibson Room of the old Courthouse,” Mrs. Watson said. “We also had Mr. Gibson's desk restored and it is in the Gibson Room as well. We were instrumental in having a Texas Historical Marker honoring Mr. Gibson placed in front of the Courthouse. Congressman Wayne Christian delivered an address and nine of Mr. Gibson's family came to be with us at the dedication”, Mrs. Watson revealed. In closing Mrs. Watson encouraged the members of the audience to become involved in the restoration of the old Records Building on the square as a larger Shelby County Museum. “We must not allow these treasures to become lost in the quicksands of time”.

Following her presentation, Mrs. Watson was greeted by TAGHS President Jan Barrett and Vice-president Margaret Oliver who had each been a student of Mrs. Watson when she taught in Timpson in the mid 1950s. 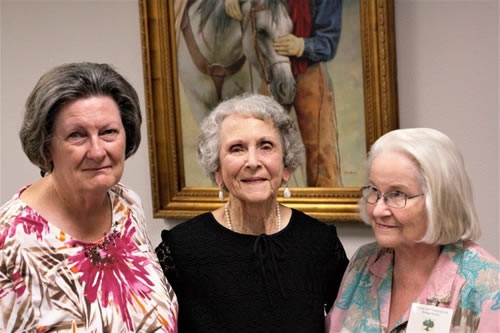 Fannie Watson in the middle with two former students.