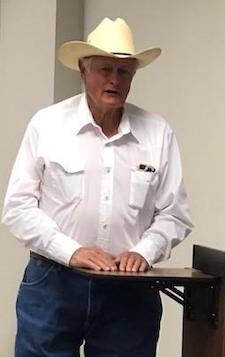 May 23, 2022 - It's not often that a talk on vegetable gardening leads to a discussion of political and economic headlines but that is what happened when Timpson's Ronnie Wolfe spoke to the May 18th meeting of the Timpson Area Genealogical and Heritage Society. Difficulty in finding certain foods on supermarket shelves is now common and some authorities are predicting widespread food shortages later this year.  “I'm in this for the long haul”, Wolfe asserted. “Just about anything we want, we try to grow it. We have five deep freezers We can and preserve food. Things could get tougher than I have seen them in my lifetime, especially if fuel goes to $10 a gallon”! Most of those in attendance agreed that having a vegetable garden is prudent and wise these days and they listened intently as Wolfe shared tips on how to make a garden more successful and productive.

“I am not degreed in horticulture,” Wolfe began. “I taught school for forty-six years and am degreed in math and physics and welding and woodworking. But since I was born in 1946, I can't remember a single year that my parents or I have not had a garden. We learned in school that the three basic needs in life are food, clothing, and shelter. Gardening supplies the first of those needs. I want to talk some about soil preparation and varieties of vegetables, because today varieties are everything! Really the three main hand tools you need to get started are a Scoville hoe, a goose-neck hoe, and a Bermuda-grass digger, often called a potato digger. You should choose well-drained soil for your garden plot and once you have your soil broken up and the grass out you can broadcast your fertilizer and you're on your way,” Wolfe continues.

“Soil pH is something you really have to pay attention to. Simply put, pH is an indicator of the acidity of the soil. A pH of 7 is completely neutral. Anything below 7 is acidic. Anything above 7 is basic. You want a neutral pH for about 90% of what you grow in a garden. There are a couple of ways to find the pH of your soil. One is to take a several samples of your soil and mix them together and take them to someone to test. I think the Ag Department at SFA will still do that for about $10”. Wolfe said “Fertilizer is an important part of soil preparation. You know, you can't continue to take away from the soil without replacing. Fertilizer has three numbers on it, like 10-20-10. The first number is nitrogen, the second number is phosphorus, and the third number is potash. If you're growing a root crop, like beets, potatoes, or turnips, you'll want to use a fertilizer with a high phosphorus content, like 10-20-10. For other crops, 13-13-13 is a good all purpose fertilizer. Be careful about using a high nitrogen content fertilizer on tomatoes, though. They will grow well but they will rot from the inside out.” he shared.

“I apply chicken litter to my soil in the fall, about November. I let it lay there until early in the year and I till it in. You can't apply chicken litter early in the year before you plant because it will burn your garden up. It has to lie there a while so the nitrogen can leach out into the soil. Use dry litter, not green or wet litter. The University of George did some experiments where they converted clay into topsoil by the heavy application of chicken litter.  Mushroom compost is becoming available in our area and may be what I use next year. You can get it down at Pineland and in Nacogdoches,” Wolfe advised. “Nutrients are just part of the equation, though. As you will remember from school, the process whereby plants convert carbon dioxide and water into food is called photosynthesis, and it requires sunlight to work. If you have a lot of tall trees around your garden plot you won't have a successful garden, because shade prevents photosynthesis. Try a different plot with full sun”, he advised. 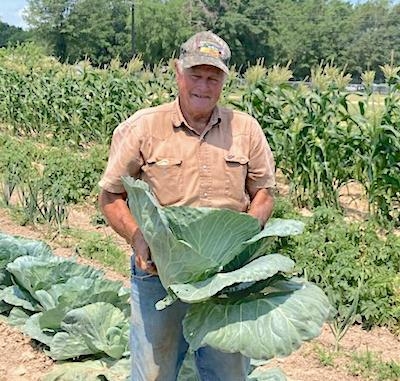 “My father never owned a tiller but I bought a Merry Tiller years ago. Tillers are a great labor-saving tool but that thing nearly beat me to death. There is a better animal out there. It's called a Troy-Bilt tiller and the model you want is the Horse. These things cost several thousand dollars but they are made of cast iron and they last forever. Look for a used one with a worn out motor and go to Harbor Freight or somewhere and get you a cheap horizontal shaft motor for a little over $100 and put on it. You'll have a durable, high quality tiller for a fraction of the price of a new one. If you are going to be an avid gardner, they are well worth getting”.

“Insects are a problem in gardens, but I haven't sprayed my tomatoes in five or six years. I plant a row of marigolds right beside them. It will keep the insects out. I order my marigold seed by the pound from Eden Seed Company because it's so much cheaper than the little packets you find a retail stores like Walmart. Order the African marigolds. They grow much larger than the more common variety and do a much better job of warding off insects. They're about $25 or $30 a pound. And speaking of seeds, if you save them, put them in the deep freezer. I planted some purple hull seeds the other day from 2011 and they made a perfect stand. I have found that if you'll soak your seeds in water overnight before you plant them they come up a lot quicker. You have to plant them by hand if you soak them but it's worth it. I believe in saving your own seeds. Let the vegetables dry on the vine or turn yellow so the seeds can mature and are easier to separate.  Sometimes a variety of vegetable you like will be discontinued but you can continue to grow it if you have saved your seed. For example, Texas A&M came out with Golden Eye Cream Pea seed a few years ago and they had it only one year. I have actually had one stalk of Golden Eyes produce three separate crops of peas.  I have also kept Elite Cream Pea seeds. They are a true cream pea and the most delicious I've ever eaten. Genetics and varieties are important”, Wolf emphasized. “Ambrosia cantaloupes are the best I have ever found. It's a hybrid and they don't have a long shelf life, so you won't find them in the supermarket, but they are perfect for a garden. They're very prolific and they just melt in your mouth! The watermelon variety I recommend is Sangria. They weight about 25-28 pounds and they're as sweet as sugar.”

“Our primary means of preserving the food from our garden is freezing. If it's a dry commodity we shrink wrap it. It takes up less space and it helps to prevent freezer burn because it sucks all the air out. We put our peas up in water in zip-lock bags. Some people blanch them before they freeze them. I think blanching degrades the taste a little and I don't think it's necessary. You cook peas in boiling water, which kills any bacteria which might have been present. We don't blanch pinto beans either. The pears that do well in East Texas are Orient and Kieffer. If you're going to do much canning or preserving, get you a digital scale. They're cheap these days.  We put up pears in a light syrup in jars using Mrs. Bertha Rhodes's recipe which calls for four quarts of thinly sliced pears, five cups of sugar, and one cup of Karo syrup. You split the batch in half and cook in small batches. Cook them until they are good and brown and thick. You'll know,” Wolfe said. “We put up fig preserves using Beth Shepherd's recipe. It's a three-two recipe. Wash and stem three pounds of figs and cover them with two pounds of sugar the night before. The next day, cook the mixture until it gets good and thick and brown and then pour it into sterilized fruit jars and seal them with sterilized lids. That's the way we do it and we have very little spoilage.  I recommend a Mandolin slicer. We put up okra and I can slice up a five gallon bucket of okra before you turn around using one of those. They're good for squash, too. Just be careful with it, because it can't tell the difference between a vegetable and a finger. 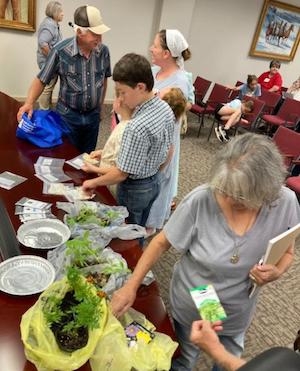 Towards the end of Mr. Wolfe's talk, he fielded questions from the audience, who also shared gardening tips of their own. In conclusion, he said “Grow a garden! It's a lot of hard work but it's very rewarding. It will make you feel better and it will make you eat better. We are what we eat.” Afterwards, attendees helped themselves to seedlings and seeds which had been brought by others to share with the audience.