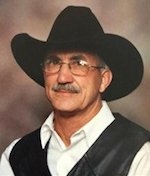 Ken had several passions including mudding, team roping, racing, and music. He had many hobbies and things he loved, being outdoors and spending time with friends was a common factor. Ken retired with Valero as a Safety Engineer after over 20 years of service.

Ken had a passion for team roping and watching others pursue their careers in the sport of rodeo. His personal favorite event to compete in was Team Roping. He loved getting to travel and ride horses and having a rope in his hand.

Diamond "K" Racing which campaigned "The Hulk" and "Crazy Horse" Mud Trucks, was one of Ken’s passions. Ken was a special guy and a born to be a winner kinda guy. He was always at the peak of his game and stayed in deep concentration of winning as a team. He spent many hours creating a winner with his determination. His determination was proven at tracks all over the Southwest. Ken was the kinda guy that wanted answers and those answers were then put to the winning combination that he and his team built together. Ken and his team set records in both trucks. He was most proud of his biggest trophy he and his team won October 5, 2019 at the Matagorda County Mug Races, 540 Outlaw Shoot Out. Ken cherished this win because it was against all the top trucks. He felt it solidified that he had the best trucks and teamed it with the best driver! Ken always wanted to know more about everything involved, the thoughts of a true winner!

It was no secret that Ken loved music. From playing instruments and DJing to having the loudest speakers around no matter where he was. His lifelong favorite instrument was the steel guitar. It’s one of the most challenging instruments to learn, and Ken played it so beautifully! He was a talented musician who had a passion for learning and sharing his talent with others.

Ken loved gospel hymns. Some of his favorites were Amazing Grace, Where We’ll Never Grow Old and In The Garden. He was most recently working on What a Friend We Have in Jesus.

We take peace in knowing Ken accepted Jesus Christ as his personal Lord and Savior and is now spending eternity in Heaven. Ken’s greatest wish is that he would one day see his friends and family he loved so dearly in Heaven.

Ken is preceded in death by his parents: Seburn and Avis Kimbro, his siblings: Shirley, Wilma, Allen, Alton and Hoyt Kimbro.

The family will receive friends on Thursday, July 30, 2020 from 10:00am to 12:00pm at Sam Houston Memorial Funeral Home in Huntsville, Texas and a funeral service will follow immediately after. Kenneth will be laid to rest at Falba Cemetery in Huntsville, Texas.

Memorial condolences to the family may be made at www.shmfh.com.