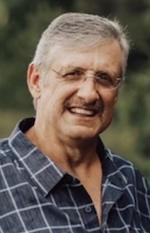 Marshall Wayne Hughes, 57, of Joaquin, Texas, passed away on January 18, 2023, in Shreveport, Louisiana, surrounded by loved ones. He was born on September 14, 1965, in Center, Texas, to Jack Monroe Hughes and Zannie (Barton) Hughes.

Funeral service will be held at Mangum Funeral Home, on Saturday, January 21, 2023, at 11am with Bro. Jody Hooper and Bro. Eugene Bowden officiating. Interment will follow at Old Home Cemetery, Center, Texas.

Wayne was born and raised in Shelby County. He met the love of his life, Trina McCann, through her brother. The two were joined by marriage on November 14, 1997. The Lord joined them together as one and through him they made a wonderful life together. Their love never wavered, and Wayne surely gained his forever soulmate. Together they have spent over 25 years together before his passing. They have 4 wonderful children whom he never missed a school event or anything that had to do with them participating in. Wayne was a devoted husband, father, and grandfather. His family was his pride and joy, and his children know that he is 100% a family man. He enjoyed watching them show cattle, playing softball, and cheering. He was their biggest cheerleader. To know Wayne was to know he was a jokester. He was quick witted. You were not going to out wit him. When he wasn’t spending time with family, he was enjoying time spent with friends. “Plain Wayne” as many would call him, enjoyed his time spent with them making memories. He liked to fish. His favorite past time would be the “book of faces” (Facebook). He loved scrolling to find the latest information.

The family would like to express their appreciation to the entire staff at Willis Knighton Medical Center for their exceptional care given to Mr. Hughes during his stay over the past few years.

To send condolences or to sign an online register, please visit www.mangumfh.net. Mangum Funeral Home, Center, is in charge of arrangements.