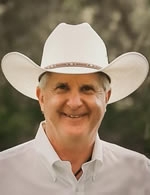 Rick Lane Campbell passed away July 19, 2021. Born in Center to James and Mona Campbell on April 5, 1959, he attended school in Center, Texas and graduated from Center High School in 1977. Rick then attended Tyler Junior College and University of Texas, and graduated in 1981. He was on the Tyler Junior College tennis team, and was a member of Delta Upsilon Fraternity.

Visitation will be held at 1:30pm, Friday, July 23, 2021, at First Baptist Church in Center with funeral service starting at 3:00pm. Bro. Rick Gage, Bro. Marlin Cloudy, and Bro. Rusty Hall will officiate. Interment will follow at Oaklawn Cemetery in Center.

Rick owned the Center Livestock Company with his father, and owned and worked cattle his entire life. He was the founder of Portacool and was quoted as saying, “I never dreamed I would get to do the things I’ve done because of Portacool. I’m a seventh generation Center kid. I wouldn’t imagine living anywhere but right here. Because of this company, I got to drive an Indy car, and dance with Ashley Judd. It was stressful at times, but a totally unbelievable ride.”  After selling Portacool, Rick was honored to serve as the Shelby County Judge.

He devoted his life to helping those in need and providing encouragement to the brokenhearted. He generously donated to many charities and organizations, even building several new churches in the East Texas area. While he is known for many things, he is best known for always being willing to help people. Rick loved to duck hunt, deer hunt, golf, spend time with his friends, and he loved Shelby County, Texas. Most of all, however, Rick loved and adored his family. He cherished every member of his family, and extended family. The names he treasured the most were Dad and Papaw. He will be missed greatly by his family, and his numerous friends.

Preceded in death by his mother, Mona Jones Campbell, and his sister, Jamie Campbell Gamble.

In lieu of flowers, memorial donations can be made to a church or charity of choice.