“Dividing the Mind” by Doug Fincher

November 15, 2021 - When I decided to get a B.A. instead of a B.S. at ETBU, I knew I would have to take a course in some foreign language. And since Greek was the World language when Jesus was born and since our New Testament was originally written in Greek, I decide Greek would be my foreign language choice. 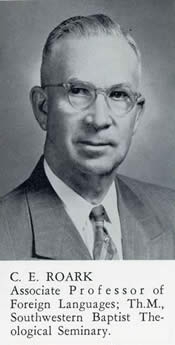 So on the first morning of Dr. Roark’s class, we were given some free advice. “Young men, “ he began, “If you plan to miss any of my classes, don’t bother coming back.” “A third of you will either flunk out or drop out of this class and it will probably be “διαιρώντας το μυαλόo” that caused it.” “Those Greek words are translated as “worry” in English but they mean literally “to divide the mind.” “And you can’t pass this course unless you come to every class with an “undivided mind.”

I immediately thought of my “divided mind´ through High School. As teachers like Mr. Wyatt was trying to explain Algebra, I day-dreamed about going down to perch fish or swim at Weaver’s pond as soon as school let out. Consequently, my “divided mind” made me barely pass Algebra even though I had great fun after school.

Because of my determination to learn Greek from Dr. Roark, I began challenging Tony Evans and Jimmy Millikan for first place in the class. On the second year, I asked Dr. Roark who did best on the last test. I had a 99 and Tony and Jimmy both had 96’s. I later learned that they both became Seminary Professors.

In 1947… at 14 years of age… I gave my life to Christ. It was unconditional surrender. And I will always be fine…

… as long as I serve Him with an “undivided mind.”