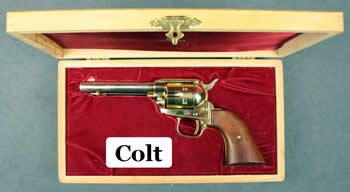 June 10, 2019 - When I built my first Gun Ship on Highway 96 in Lumberton, Texas (1975), James Van Cleef was one of my first customers. He lived in Port Neches, Texas and was a butcher in a large grocery store there. His interest in firearms was limited to Colt Single action pistols… no rifles or shotguns… just Colt revolvers. We became close friends and learned a lot from each other.

James always asked a lot of questions and after I answered them, he would invariably reply, “Just curious”. There’s a is a big difference in good curiosity and bad curiosity and James had the good kind. When my “curious” Dad was young, he explored the beautiful sand hill roads around the “Short” and “Jericho” communities near Center, Texas… just to watch for a new surprise. I am also curious and followed in his footsteps. Some people have no curiosity and no care. Others have great curiosity but are nosey and learn new things to peddle gossip.

I visited James at his home in Port Neches one day. I showed him my new camera and when he asked me what kind it was and its cost, and I told him it was a Yashica Mat and that it cost me $200, he responded as usual by saying: “Just curious”. Then I asked him if he knew he always replied “Just curious” to my answers. “Sure”, he said. “But why do you ask?” “Oh, I don’t know”, I chuckled. “Just curious, I guess”.

I haven’t seen James since 1976. He was a good man and a trusted friend… and I am curious to know where he is today.