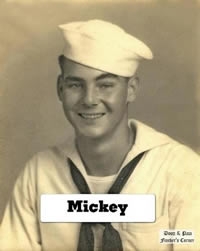 July 19, 2021 - Mickey was Mother’s younger brother.  He was a beautiful man…not effeminate…but strong, kind,  and for many reasons my favorite uncle. I was about six years old when he and Uncle Irvin were both in the Navy during World War II.  When he was discharged, he always showed up around Christmas to be with our growing family.  I peeked through the key hole on Christmas Eve once and saw him in front of the Christmas Tree putting out presents for us.  It was that night that I realized who Santa Claus was and why Santa Claus came faithfully to our family every year.

I was a college freshman when Daddy called one day with a short, sad message: “Son, come home,” he said. Mickey is gone”.  He tragically died at 28 years of age.  Later I learned that Mother had Mickey’s dresser…..distinctive because of its large, round mirror.

Last week as I visited my late sister Jeri’s home, I was so happy to see Mickey’s beautiful dresser…still in our family…and as beautiful as ever. But seeing Mickey’s dresser is nothing compared to the joy I’ll have when I 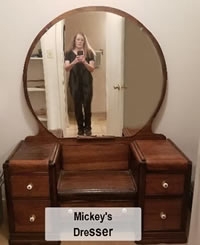