“My Brother That Was Shot Twice” by Doug Fincher 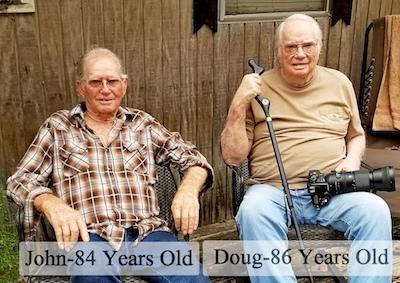 When we lived on Maxwell Street in Center, Texas, Bill, John and I were playing behind the house one day when Bill accidentally fired our old Red Ryder BB gun and the BB hit John (5 years old then) in the side of his face. The power of the gun was so weak that the BB barely cut through his skin. To keep Bill from getting in trouble, we decided not to tell Mother about it. Pam and I were visiting John at Huxley yesterday when I asked my 84 year old brother if he still “had his BB.” “Sure do,” he laughed. “Feel it roll.” Sure enough it rolled around as freely as it did 79 years ago. John said he wasn’t sure when… or if…Mother was ever told about it.

When John was in his thirties, he had two bird dogs, “Bird” and “Queen.” He was using his dogs to “point” for quail hunters at The Hawkeye Hunting Club when a half-drunk novice hunter fired his shotgun toward John hitting him in the eye with a #9 pellet. His doctor in a Longview Hospital told him that removing the shot would cause too much damage, but as he was examining John’s eye, the shot suddenly rolled out on the bed. His eye was fine from that day.

My brothers and I were shot “at” as we were leaving watermelon patches, but John was the only one of us that was actually shot… not once, but twice…

… and both times by accident.