“My Sister Talks to Lizards” By Doug Fincher 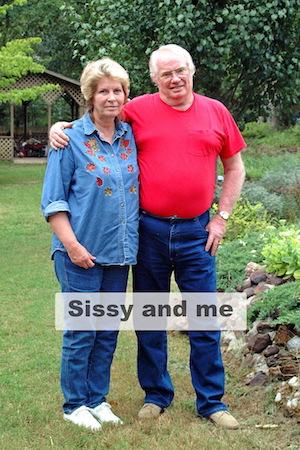 The combination of sandy roads, spring branches and a plentiful food supply has made Center, Texas’ Sand Hill Community an ideal nesting place for exotic birds from Mexico and Central America. Located about six miles south of Center, Texas, it remains one of the most beautiful parts of Shelby County Texas. My Dad explored these sandy roads when he was a youngster and took all ten of us there many times as we were growing up. Instead of vacations to The Grand Canyon or Yellowstone, we made ours to The Sand Hills…to Big Ditch and Gunnel’s Cave… which were only a short drive from of our house in Center.  After becoming adults, we all made frequent trips home to see Mother and to re-explore the Sand Hill roads with her.

Back in the 70’s I asked my sister Jeri in Texarkana to meet me at Mother’s and spend a day in the Sand Hills with her. We left her house early one August morning and after a drive through the Snow Hill, Short and Jericho communities, we wound up taking pictures and picking Sand Hill grapes along a sandy road near Gunnel’s Cave.

Suddenly, I spotted a handsome lizard basking in the sun about fifteen feet off the road. As I complained to Mother about the lizard being too far away to photograph, Sis quietly touched my shoulder and whispered, “Let me talk to the lizard.” I nervously looked all around to see if anyone was watching us. Then as we walked toward him, she began: “Don’t be afraid.” “We won’t hurt you.” “Hen Doug just wants to take your picture.” After telling the lizard how pretty he was, we got close enough to see his eyes twinkle and after getting several close-ups, we backed away leaving him undisturbed.

As we were discussing my sister’s “way with lizards” on the way home, Mother said, “You know, God lets us come close and talk to Him, too.” “I know, Mother,” I replied. “And not only do we talk to Him.” “Through prayer and His Word…..