“Our Paradise” by Doug Fincher 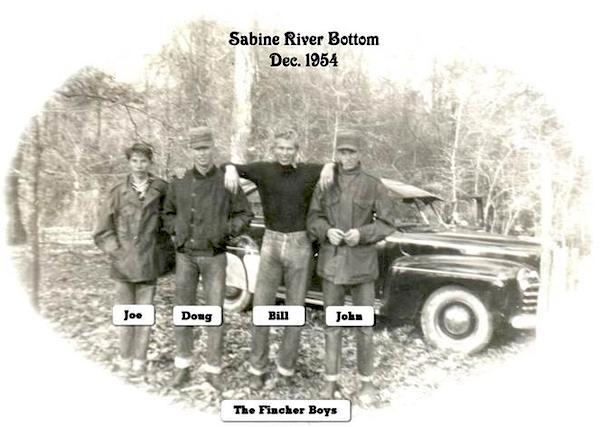 May 9, 2022 - When I was a teenager, we lived in an old house across the tracks on the East side of Center, Texas. My brothers (Bill, John and Joe) and I laid claim to an area just outside the city limits and called it “Our Paradise.” It covered about a half mile area and was owned by locale businessman, Horace Weaver. Included in Paradise were two stock ponds, a small creek and some scattered woods. We could cross Dellinger’s pasture and arrive at our hunting, fishing, swimming, blackberry and plum-picking, pecan-gathering paradise in moments. A slingshot, a pocket of smooth rocks and some perch hooks was all we needed for a great day in Paradise. Since our family was poor, (like many were in the 40’s) every fish, rabbit and squirrel that we took from Our Paradise wound up on our dining table.

Our Paradise also sported a persimmon tree (that the ‘possums shared with us) and a mulberry tree. A cherry tree, a plum orchard and old water well was all that was left of an old house place. While Bill and I were picking plums one day, we heard gunshots and then saw our dog Trigger racing toward us with bullets hitting all around him. The two boys doing the shooting pursued Trigger up the hill near us and when Trigger ran into the orchard, David Weaver and Richard McKee ran in after him and came face to face with Bill and me. Sensing the inevitable, David handed his .22 rifle to Richard and the battle with Bill was on. The fight resulted with two bloody and torn shirts… not torn by Bill and David… but by the sharp thorns of the orchard. No one won the fight and we were all friends when we went home that day.

We lived in several rent houses as we grew up in Center. The sagging wall paper and rotting porch at our house in East Center were of little consequence to our happy family. And “Our Paradise” would have been a tame, non-descript place to most people. But this old house and plain scope of woods and ponds bequeathed to me and my brothers some of the best memories of our lives. They were good days…