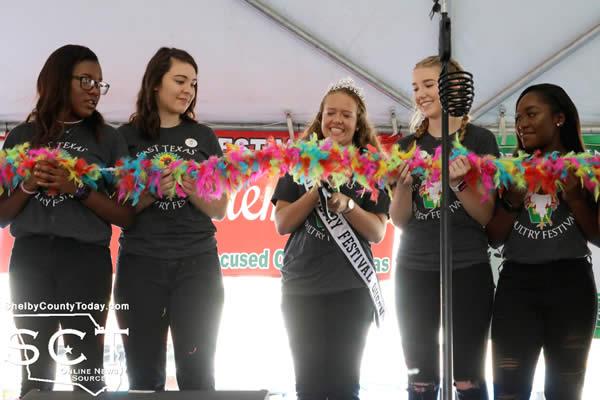 October 3, 2019 - (Album) - The 43rd Annual East Texas Poultry Festival (ETPF) is clucking and crowing with the event now in full swing! Ceremonies were held Thursday, October 3, 2019, under the Frances Oates tent on the Center square.

Josh Payne, 43nd East Texas Poultry Festival Chairman, introduced each of the speakers for the opening of the event and Allison Harbison, Shelby County Judge, returned as the opening speaker followed by David Chadwick, City of Center Mayor/Farmers State Bank President. This year Brian Dean, Shelby County Chamber of Commerce Board Chairman, welcomed all to the East Texas Poultry Festival and he extended thanks to all the volunteers involved in the event.

“Josh Payne and the steering committee, the work area chairmen, on behalf of the chamber board members we thank you for your leadership and dedication,” said Dean. “Also would like to thank the ambassadors, the Junior Chamber of Commerce and the young Ambassador students for their hours of volunteer work. Now let’s all enjoy a fun and safe 2019 Poultry Festival.” 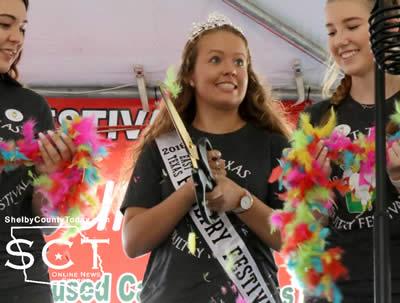 Center High School band performed the National Anthem, followed by Timpson Kindergarten students leading everyone in the Pledge of Allegiance.

After each of the ETPF Queen’s court introduced themselves, Kristen Orsak performed the ceremonial cutting of the feathers and the 43nd ETPF was declared open.