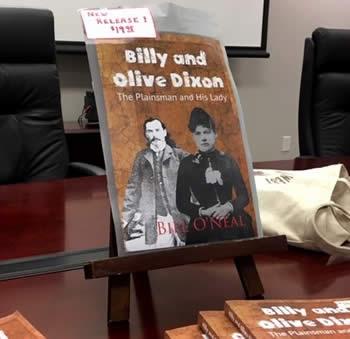 September 19, 2019 - Many people lived remarkable lives replete with amazing accomplishments in the American West but never gained the recognition which was their due. Billy Dixon was such a person and were it not for a biography written by his wife, Olive, and historian Bill O'Neal's research, he might have faded from history completely.

Speaking to members and guests of the Timpson Area Genealogical and Heritage Society's monthly meeting on Sept. 18, O'Neal shared that he would never have known about Billy and Olive Dixon either had it not been for his discovery at age 13 of the biography of Billy, that his wife wrote, in the Corsicana Carnegie Library. “I was interested in these Old West guys and I haunted the library looking for books about them,” he said. After visiting the site of the Battle of Adobe Walls some time ago, O'Neal began research into the lives of Billy and Olive Dixon which he crafted into his recently published book Billy and Olive Dixon: The Plainsman and His Lady. 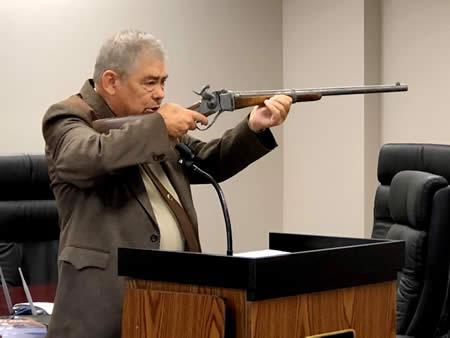 Published in 1914, Life of Billy Dixon by Olive Dixon grew out of a series of interviews with her husband by Mrs. Dixon which occurred because she and his friends thought the history of Billy's life needed to be recorded. “Billy was a taciturn sort of fellow and didn't like to talk much, least of all about himself,” O'Neal revealed. Mrs. Dixon kept notebooks around the house and even out in the stable to write down any recollections of his life she was able to coax out of him.

Born in what would become West Virginia in 1850, Dixon drifter west in his teens, eventually becoming an ox driver, mule-skinner, and Army scout. He was a skilled marksman, which led to his becoming a buffalo hunter in the Texas Panhandle by 1874. He and a small group of hunters and settlers established the community of Adobe Walls that year but it was soon attacked by a band of some 700 Indians on June 27 of that year, O'Neal told. By the third day of the attack, the settlers were able to drive the Indians away to a distance of between one-half to three-quarters of a mile. 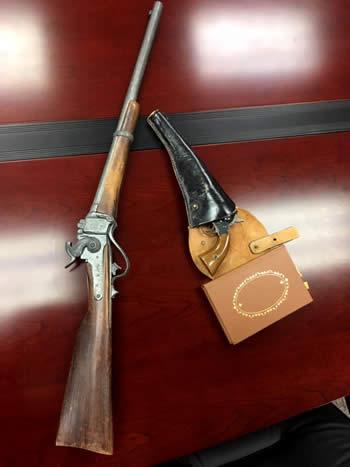 A group of warriors gathered on top of a plateau nearly a mile distant attracted the attention of the settlers. Encouraged by the others, Billy Dixon, using a .50-90 Sharp's Buffalo Rifle which had a much greater range than the more common Winchester 30-30's, made what O'Neal called “the most famous shot in the history of the Old West”. Adjusting the rifle's sight for such a distance, Dixon fired at the group atop the plateau and hit one Indian, killing him. This so unnerved the Indians that they departed.

On Sept. 12 of that year, Dixon was working as an Army scout when his party of six soldiers and scouts was was attacked by a group of over one hundred Indians near the Washita River, south of present day Canadian, Texas. Taking refuge in a buffalo wallow, the group of six fought off the Indians while allsustaining wounds themselves. Dixon carried two wounded soldiers into the wallow and in the morning went for help. For his bravery he became one of fewer than ten civilians to be awarded the Medal of Honor. 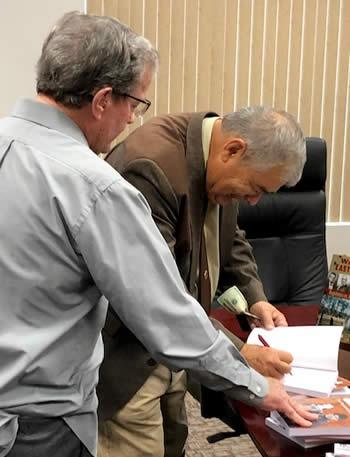 O'Neal stated that Dixon eventually returned to the Adobe Walls area, started a ranch and orchard which gradually prospered, and became the local postmaster and Justice of the Peace. After about ten years, he met Olive King, a schoolteacher about twenty years his junior, whom he married. They had eight children. Later they moved to Plemmons and then the Oklahoma Territory. He died of pneumonia in 1913. Mrs. Dixon's biography of her husband was published a year later. Mrs. Dixon never re-married and continued to write and became active in historical preservation until her death in 1956.

The Timpson Area Genealogical and Heritage Society meets on the third Wednesday of each month at 2PM in the Meeting Room of the Timpson Public Library, located on the corner of Austin and Bremond Streets in downtown Timpson. The public is invited.