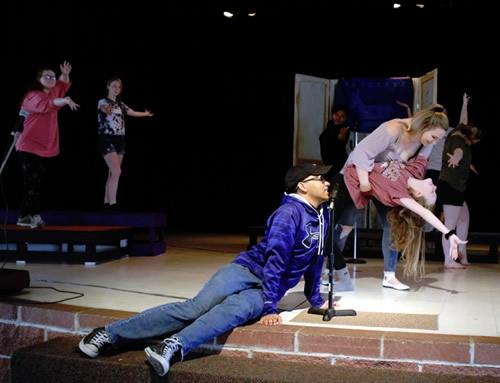 Students rehearse for Thursday's and Friday's production of 'The Broken Nose'

April 24, 2019 - CHS Theatre's spring line-up "A Season for Originals" continues with show three of a scheduled four: "The Broken Nose," a brand new comic musical from Mark Perkins and Keaton Watlington and starring The CHS Advanced Players and its First Period Players. The musical will be presented at the CHS Auditorium on Thursday, April 25 and Friday, April 26 at 6:30.

It is most unusual to have original scripts produced in a small high school department. It's most unusual for there to be two in one season. And it's exceedingly rare for one to be a musical complete with original music and lyrics.

"I've never been so excited," theatre director Chris Watlington said. "In October when this musical and Kristen Orsak's serious drama passed over my desk, I wondered if either would be any good. I was astounded when I read them and realized that besides the one-act, original shows could be our whole 2018-2019 line-up."

The original season began at Christmas with another original script, Mr. Watlington's "Mayflower Inn," getting a performance at the Rio Cinema.

"I was tickled to get that script produced. But the shows we're doing in April are much more ambitious than that one. Kristen's was a serious meditation on an important issue. Mark and Keaton's is an uproarious romp with unusual, memorable characters, clever wordplay, and some truly stunning music written and recorded by Keaton by himself in the studio."

"The Broken Nose" tells the story of Brad Perkins, a down on his luck high school kid who, try as he might, can't get the attention of the girl he loves.

"Though it sounds like your typical love story, I tried real hard to make it in some ways opposite of that," author Perkins said. "This is not 'boy-meets-girl-boy-loses-girl-boy-wins her back.' We try to turn the formula upside down with this one."

Even the music strives for that sense of strangeness. "I'm trying to write the best sounding music I can, the kind of musical theatre material that might make it to radio, "composer Keaton said." But when you match the music to the lyrics, sometimes it makes you just scratch your head."

The Thursday show is a fund raiser for the theatre department. Adult ticket prices are $3 and students are $2. But the Friday night show is titled "'The Broken Nose,' featuring CHS Theatre and presented by the Shelby County Historical Commission. All proceeds go to benefit the commission and the work it is doing to preserve the records building on the square.

"Teddy Hopkins called me a while back wondering if we might be able to work together to raise money for such a worthy project," Watlington said. "I told him we just happened to have a production ready to go. I did warn him that the story had nothing whatsoever to do with the history of anything, but we decided not to let that stand in the way of raising money for an historically important project!"