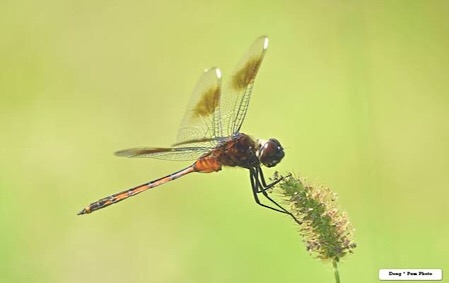 April 5, 2021 - I visited my crop-duster friend Wayne Smith in Edgerly, La. last week. I first saw Wayne back in the 80’s when he flew his Ag-Cat Crop-duster over a field where I was photographing birds. He was flying low enough for me to see the cigar in his mouth.

From that day when I heard his plane, I’d follow him in my pickup and photograph him as he sprayed insecticide over the rice fields. I was watching him spray Phil Rauser’s rice field one day when the body movements of his flagman down the field caught my eye. As the young man moved closer to me, he’d wave his hands in the air while waiting for the plane’s next pass. When he got close enough for us to talk, I asked, “Why are you waving your hands?...is something wrong?” “Aw, naw, there aint nothing wrong,” he smiled. “I just been catching skeeter hawks.”

Some folks believe that only a lunatic would think of catching a dragon fly. To the contrary, it’s people who won’t do the useless things that have the mental problems. Lunatics are always serious…they don’t do “useless” things. But they’d likely get on the road to sanity if they’d just relax…get careless…
….and catch some “skeeter hawks.”