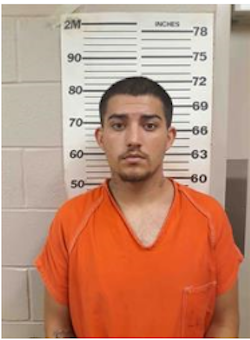 Several firearms were taken from the vehicles, along with other items.

On July 24th at approximately 10:15pm Officer Spencer Anderson made a traffic stop on a subject riding a bicycle in the middle of Hurst St.

During the stop, Officer Anderson discovered the subject to be in possession of a semi-automatic pistol.

The pistol serial number was checked through Dispatch and was found to be recently stolen from a vehicle off of Pine St.

The subject was identified as Brandon Morano, 23, of Longview, TX. Morano was placed in custody for unlawfully carrying a firearm, and possession of a stolen firearm.

Morano was booked into the Center Police Department holding facility without incident.

Through further investigations, Moreno has also been charged with a total of 10 criminal offenses.