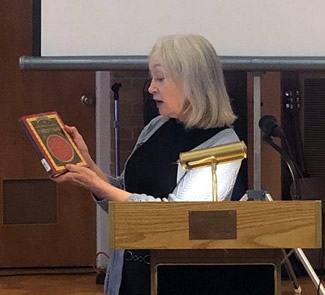 Janene Walker presented her report on A Christmas Carol by Charles Dickens. Janene chose this book because it has made an impact on not only herself, but millions of others. Having worked in the real estate title/tax business in Houston, she felt the stress of December 31st as deadline in a very busy month. “Bah Humbug” was not an uncommon feeling at times.

Charles Dickens lived during a time in England, the Victorian era, where there was a stark contrast of society – the beauty and richness of the aristocracy and the incredible poverty and depression of the poor working class. A middle class did not exist.

With no network of governmental social services, charitable enterprises for the poor and unfortunate of all types were run by churches and private organizations, many of which were guided by questionable motives or methods. For Dickens, this was unacceptable – the working and living conditions, and the lack of support.

While walking through the dark damp streets of London one night, Dickens came up with an idea for a new story. He was determined to change the way society thought about the poor.

Dickens wrote A Christmas Carol in six weeks. He published it himself right before Christmas. The book sold out by Christmas Eve. It became one of the greatest influences in “keeping Christmas.” The story also increased charitable giving in Victorian England almost overnight.