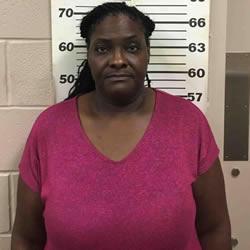 The warrant was issued after a lengthy investigation conducted by the Street Crimes Unit in response to several complaints received by the community of illegal drug trafficking at the residence. Officers arrived at approximately 9:30pm, secured the residence and conducted a search that revealed approximately 7 grams of crack cocaine (street value approximately $700 dollars) along with numerous items used in the making, packaging, and distribution of the illegal substance.

The resident, Latwan Antionett Gibbs, age 47, was taken into custody and booked on the charge of Delivery of a Controlled Substance, felony of the first degree. There are other warrants pending in this ongoing investigation.

This is just the beginning. The Center Police Department’s Street Crimes Unit is determined to make an impact on our community.  Detectives want the dealers to know that the trafficking of illegal substances will not be tolerated and encourage the community to take a stand.

Please call and speak with Detectives if you feel this is going on in your neighborhoods. Together we can make a difference. The Center Police Department would like to thank the Shelby County District Attorney’s Office as well as DPS Troopers on scene for their assistance in this warrant.