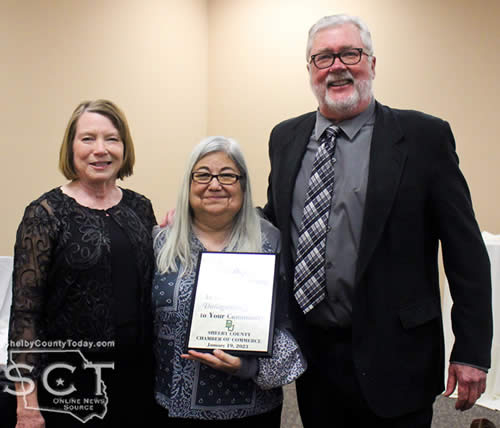 January 20, 2023 - (Album) - The Shelby County Chamber of Commerce celebrated the past year during their 100th Annual Awards Banquet held at the John D. Windham Civic Center on Thursday, January 19, 2023. Top honors of the 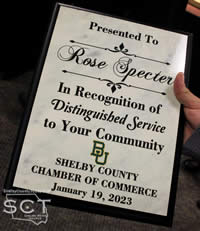 evening went to Carriston Hendricks as Young Citizen of the Year, Rose Specter received the Distinguished Service Award, and Keith and Shonia Putman were named Farm Family of the Year. 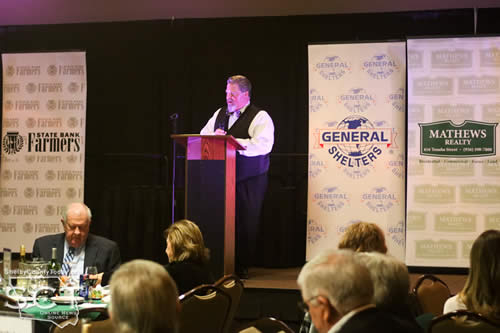 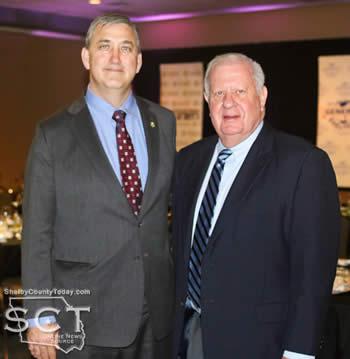 Chairman Doyle gave appreciation to the Chamber of Commerce staff - Deborah Chadwick, President; Tammy Luman, Administrative Assistant; and Elena Almaguer, Secretary. Next to be thanked were members of the board of directors, “I’m fully aware that its not easy to always get a Monday off of work to attend a board meeting, so I thank you for that and for your willingness to serve and to share ideals to make the chamber better.” Doyle then thanked the ambassadors for being the face of the chamber at ribbon cuttings and other events.

“To the members of the Chamber, you all come forward and you know what it means to join together as a group, to get things done as a group, to combined your resources. I want to thank you for that,” said Chairman Doyle.

“This past year we had eighteen new members in the chamber, two new business ownerships, All Hours Fitness expansion…, had the dedication of Perry Sampson Park and thank you to the City of Center and Tyson Foods. Center Health and Harmony celebrated a 10-year anniversary. Shelby Savings (Bank) is showing off a gorgeous remodel for their 40th Anniversary. And we had a great turn out in our main events - The Grill Fest, Teacher Appreciation, First Responders Lunch, Leadership Conference, Health Fair, Taste of the Holidays, Christmas Parade, and Junior Chamber of Commerce program.” Doyle also elaborated on the Poultry Festival which was a huge success with what he believed to be the highest number of attendees in the festival’s history. 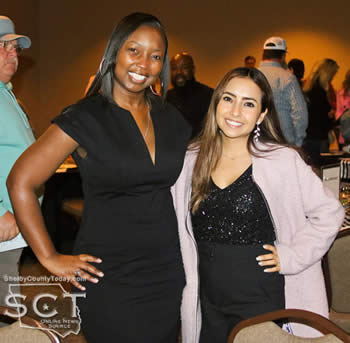 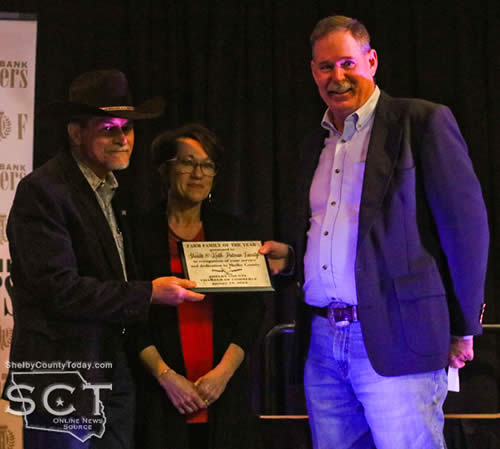 Lane Dunn, AgriLife Extension Agent, announced the Farm Family of the Year to be Keith and Shonia Putman, Putman and Putman Farms, LLC. Keith’s parents Leo Paul and Wilsa Putman were Farm Family of the Year in 1991 making the Putmans a second generation award recipient. In 2010, Keith Putman purchased the farm from his dad. Also, in 2010 Keith and Shonia married and she became not only his life partner but his farm partner. Dunn continued, “They now raise broilers for Tyson Foods - Carthage Complex and raise over a million birds a year, that’s quite a few. They’ve been Mooseburg Award top for Shelby County Poultry Grower in 2014 and in 2015. The Putmans also produce top quality hay each year and sell to our local cattle producers here and they do an excellent job with that. Putmans attend Patroon Baptist Church where Keith is a deacon and the treasurer and he’s also a member of the McClelland Water Supply and he serves on the board. Keith and Shonia would like to take pride in their farm and they want to pass it on down to the next generation and that is kind of all we can ask. It is a true family farm.”

Dunn also gave special thanks to John Snider for serving our youth, 4H and FFA, with leadership for our Livestock Show and Poultry Festival for the past 30 years. 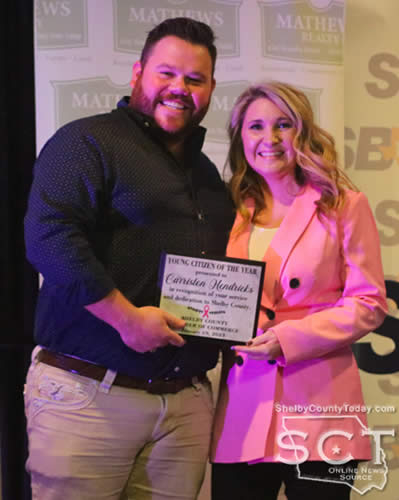 Carriston Hendricks was born in Tennessee and moved to Texas where she attended Carthage High School. Carriston is a Family Nurse Practitioner after receiving her degree from the University of Texas in Tyler. She is married to Luke Hendricks and has two wonderful children. She opened Priority Family Healthcare in 2020. Wiggins elaborated about her, “To say she is passionate about healthcare and the community is an understatement. She has always taken care of others - her children, her husband, her friends, her family, and of course her patients. She is passionate about the health and welfare of the community and she is especially passionate about raising awareness and money for breast cancer. She is on the board of directors for 'Boobies and Bingo' and assists with Boos Battle. Carriston works with Coated in Kindness, helps the Shelby County Children’s Advocacy Center and the Princess Ball, volunteers with Breakfast with Santa. She is also a member of the Shelby County Chamber of Commerce Health Fair committee and speaks annually about breast cancer awareness and is a sponsor and participant of the annual Health and Fitness Fair. Carriston is a pediatric CHD and CCHD for the state of Texas.” 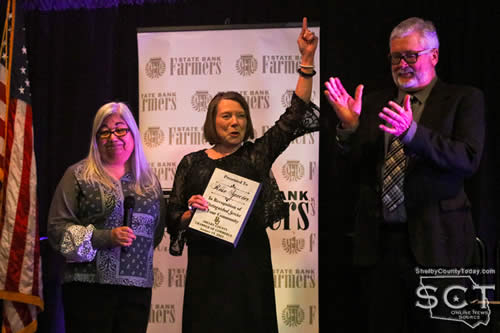 “In 1991 a Golden Corral franchise brought the family to Shelby County. In 2004, T&R Steaks and More was born. The ‘R’ in T&R is our recipient tonight. We are deeply honored and so proud to present the 2022 Shelby County Distinguished Service Award to a very special person, Mrs. Rose Specter,” announced Danny Paul Windham. Together, the Windhams shared what all Rose contributes to Shelby County. Despite running two businesses, she volunteers in many organizations including Hope Community Medicine and the Chamber of Commerce. For the chamber she serves on committees such as Grill Fest, Taste of the Holidays, Christmas Parade, Chamber Banquet, and the many Poultry Festival events. She is an active member of First Baptist Church helping to organize the Joy Seekers Women’s Conference. She is often the first to arrive and the last to leave as she shows a willingness to do whatever is necessary. She serves as a mentor for many local businesses offering advice when asked with a goal of all being successful. She is also a devoted Baylor Bears fan. 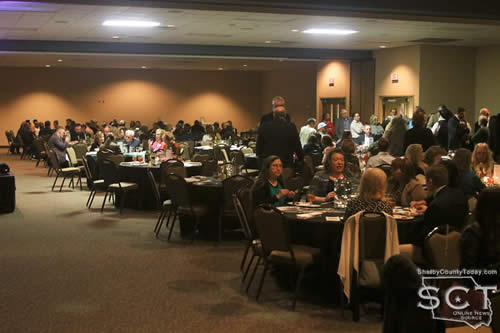 Sally Windham expressed, “Rose is a faithful Christian, a loving wife, a proud mom, a doting grandmom, a successful business woman, a willing volunteer, a giving mentor, a devoted Shelby Countian, and a friend to all. Rose is truly noteworthy and remarkable!”

Rose Specter shared, “I’m overwhelmed. I don’t really know what to say. This is not originally my home, but I consider it my home. This is the most compassionate, caring, and giving community that I’ve ever seen in my life… nothing beats Shelby County.”