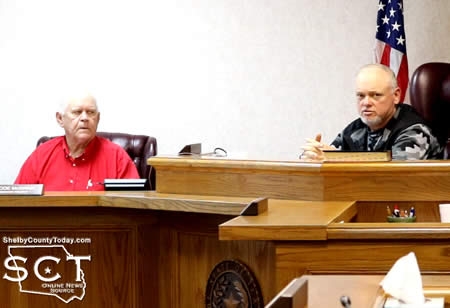 Gary Rholes, Shelby County Attorney, addressed the court on the issue and explained to the commissioners what was being requested. He reminded the commissioners of a gambling machine raid which took place September 5, 2021, in the area of Precinct 3 and 4 handled principally by Constable Roy Cheatwood and Constable Josh Tipton.

$16,000 in cash was seized, according to Rholes, and some of the funds have been used to purchase equipment for Constable Cheatwood and Constable Tipton.

"Constable Cheatwood has gotten a drone for use in searching and we've gotten a night scope for the constables and one that we're letting [Texas] Department of Public Safety use," said Rholes. "So, this is going to a good cause."

Rholes explained the value of the machines is unknown; and the value of such machines varies greatly depending one what type they are. He reminded the court of previous gaming raids in which the machines had been valued at around $3,000 each.

"You can see from the item on the agenda, anyone bidding will be required to sign a notarized statement that these will not be used in an illegal manner," said Rholes.

He speculated the majority of bidders would be from Louisiana where the use of the machines would be more likely legal. Rholes was seeking to advertise the bids for two weeks with the sealed bids being due January 3, 2022, at the Shelby County Judges office for the bids to then be opened January 5.

The machines are currently housed at the Shelby County Sheriff's Department and Rholes stated Sheriff Kevin Windham or Chief Ruth Gonzalez can be contacted at the Sheriff's Office to see the machines.

Rholes encouraged the machines need to be sold to make the Sheriff's Department space available, and acquire the funds so they may be utilized by law enforcement.

Tom Bellmyer, Precinct 4 Commissioner, asked what the benefit to the county is in selling the machines.

"This money would go into, pursuant to a court order, these machines have been forfeited to the county to the County Attorney Gambling Seizure fund," said Rholes. "The money will go in that fund, the bills go thorugh Clint [Porterfield, County Auditor,] and [Ann Blackwell] the Treasurer and we're going to use it for law enforcement."

Rholes clarified for Bellmyer the funds used to purchase the drone and night vision equipment were those that were forfeited by Judge LeAnne Rafferty, 123rd Judicial District Judge, to the Gambling Seizure fund.

Bellmyer was concerned the use of the funds wasn't brought to the court for approval and Porterfield explained the circumstances surrounding the funds in question.

"These are special funds, for forfeiture items as this along with trust funds that we have for example in the District Clerk's [office], those don't require commissioners' court approval since they're already under the jurisdiction of that elected official that owns them or has them," said Porterfield. "They can be spent as they're spent for the lawful purpose of that fund. This isn't, I would classify this as not taxpayer money." 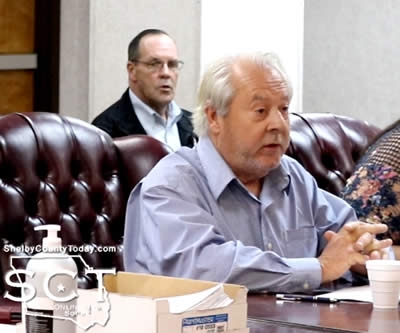 Rholes explained the order signed by Judge Rafferty indicates the fund is to be administered by the Shelby County Attorney, in accordance with law. Porterfield stated there is also a review process for all expenditures.

Roscoe McSwain, Commissioner Precinct 1, expressed appreciation to Rholes for delivering the funds to Porterfield and Blackwell for distribution.

"They administer the checks and everything is documented and kept up with through their offices," said McSwain. "In the past that hasn't always been the case."

Bellmyer said he just wanted to understand the process and remarked there are good checks and balances between the auditor and treasurer offices and coming from the county attorney office.

"I don't see no good cause or good reason why we wouldn't sell the machines. We have to dispose of them to get rid of them one way or the other," said McSwain.

Bellmyer asked for an estimate on the total amount of money that might be gained by the sale of the machines; however, Rholes said he didn't know and any money that could go to law enforcement is better than destroying the machines and getting nothing for them.

A motion carried to advertise for bids on the machines for two weeks advertising with bids for the machines being received by January 3 and opened on Janurary 5 with bids being turned in to the County Judges office. All commissioners voted in favor with the exception of Commissioner Bellmyer voting against.