June 26, 2019 - The Shelby County Commissioners embarked on a fact finding talkathon during their June 12, 2019 meeting. Although the agenda was light, one particular item which was a non action item carried enough weight to engage the commissioners and many from the audience for a little over an hour and 20 minutes.

It began with an inquiry into an incident involving an unknown individual on an unknown date who was reported to have had a heart attack and EMS personnel were allegedly lax in their response time and knowledge of the area.

Roscoe McSwain, Precinct 1 Commissioner, in response to hearing someone had issued a complaint to the sheriff about the call, summoned Allegiance Mobile Health to the court for the inquisition. However, there was no accuser to give the background on the incident in question.

This was combined with radio issues that have long plagued Shelby County since the decision was made to switch to a digital radio system funded by DETCOG. 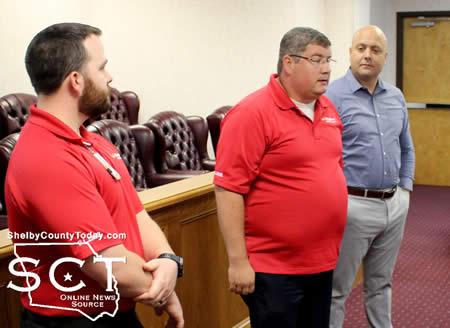 "When we got the phone call asked to come to court nobody could give me a reason other than it was to discuss contract, so I don't have any information I can give you per the individual complaint," said Cude.

McSwain said it all goes back to a complaint made to the Sheriff's Department and the reason he included wanting to discuss the contract is because the issue had everything to do with dispatch.

According to McSwain the alleged call was for a heart attack at Grisby Lake off State Highway 7 West just near the county line. McSwain said after waiting for an hour the caller and the patient left in a private vehicle. The ambulance then met the car on Highway 7 in Nacogdoches County.

"The Sheriff told me the lady kept calling, and somebody correct me if I'm wrong but if my memory serves me right about this we discussed this about the dispatch, y'all wanted to dispatch yourselves," said McSwain.

He said the caller kept speaking with someone (a dispatcher) in an area not related to Shelby County. McSwain said the county assumed the 9-1-1 calls were being handled locally in Shelby County.

"She couldn't explain to them where to go. Well that's my question, because that's a problem, if it's here local and you're dealing with local people there's so many people still say Grisby Lake. They don't say county road so-and-so Highway 7 West," said McSwain.

McSwain said if the dispatcher is someone in another county and they're trying to tell them where to go, they aren't going to know where they're talking about.

"He happened to be, if my memory is right, a ex-Police Chief from the city of Nacogdoches. It don't make no difference who it is, but their (dispatchers) ill informed about how the system's supposed to work too," said McSwain.

Cude explained how their dispatch works and he said the dispatch is still in Shelby County 24 hours a day, seven days a week, they haven't removed dispatchers. He said the way their digital system works is if the local dispatcher is on the phone, the call immediately is rolled to another dispatch center in another area. He said they also have to contend with unreliable internet in Shelby County, and when it goes down the calls are then also forwarded to another dispatch center.

Cude explained in other areas where they work, the dispatch forwards the 9-1-1 call to them when they realize it's a medical call, unlike Shelby County.

"Other areas they transfer the caller to us when they realize it's an ambulance call, then we talk to the caller, get the information we need, do pre-arrival instructions by EMD certified people who give them pre-route instructions," said Cude. "That's something that we've battled here being able to get those callers. Because that's something that we give to the caller not the Sheriff's Department dispatch."

Cude described how in other ares they cover Push to Talk (PTT) phones and radio are both utilized to dispatch; however, PTT doesn't work in Shelby County. Each truck has it's own cellular phone, and then they all have radios.

Cude explained they always try to keep two ambulances available in Shelby County. If one has to leave, he said they call another in from Nacogdoches.

McSwain said he wished he had the caller that complained or her case before him, so he could even help explain to her how the system works to her.

Gary Rholes, County Attorney, asked if there was anything the ambulance company could do in situations where a caller may use an old name for an area rather than a newly given name or number.

Cude explained they did develop a list kept at the local office to help with such areas as Possum Trot, which would indicate what part of the county that would be located.

Although all of the procedures of the company were discussed, no clear indication of what might have happened or not happened on the call in question was ever brought to light, because neither the commissioners nor the ambulance company had the names of the complainants involved or when the alleged incident occurred.

"I'm not saying you did nothing wrong, but it's hard for me to defend you or criticize you when I don't know all the facts," said McSwain.

It was even suggested as a possibility that dispatch for the ambulance could be housed within the Sheriff's Department since they receive the initial call.

The commissioners invited anyone in the audience to address them about issues with radios. 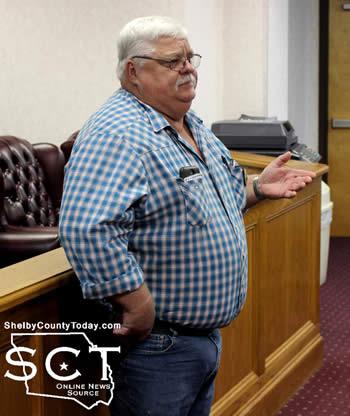 Roy Cheatwood, Constable Precinct 3, said from Center to Joaquin the radios have a consistent problem functioning at all.

"We've had several occasions here lately on chases. Saturday me and this [Deputy] were down in Huxley and that area we don't have no radio, we don't have cell phone we just down there by ourselves, we have to fend for ourselves," said Cheatwood.

Cheatwood described other instances during pursuits in the southern and eastern end of the county where communication between officers was non-existent.

"We can try to find out what the problem is now and fix it, or wind up in a court of law on a death of an officer, and we don't want that. It's not a matter of if, it's a matter of when," said Cheatwood.

Texas Department of Public Safety Troopers were able to communicate via their own DPS radios with Lufkin; however, communication to Shelby County Sheriff's Department and Center Police Department was unreliable from the area of FM 147 and FM 139. 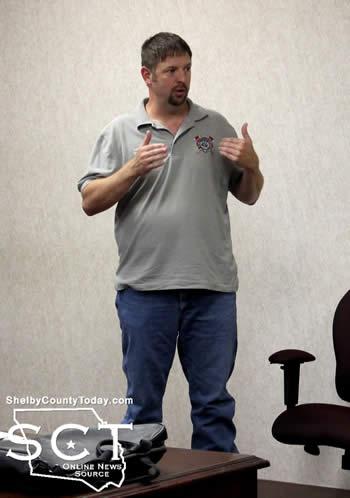 "When we've worked with Allegiance, they've done a really good job and they're very professional. We've got no complaints whatsoever there. The biggest issue we have is the gap in coverage, you know, from the time a 9-1-1 call is placed to the time we get an ambulance at our end of the county it is 15-25 minutes," said Ewing.

"We've currently got 11 of our members enrolled in a class through Kilgore College. By the end of the summer we'll have hopefully all 11 of us certified as Emergency Medical Responders. That's a notch below an EMT," said Ewing.

This would help to have someone provide immediate medical attention to someone at an incident scene, and help EMS before they arrive.

Brian Loudenslager with Nalcom Wireless Communications was asked to speak to the court about the radio communications in Shelby County and he said he has been dealing with the county for the past six to seven years involving the radios.

He gave a history of the changes to the radio system from analog to digital, the removal of equipment and relocation to another tower. The main direction he suggested to the county of a way to find out what the radio system needs to resolve its issues is to seek an independent study of the communications system, and find out where the problem areas are. He said that has never been done for Shelby County, and it would help guide decisions on what the system needs. 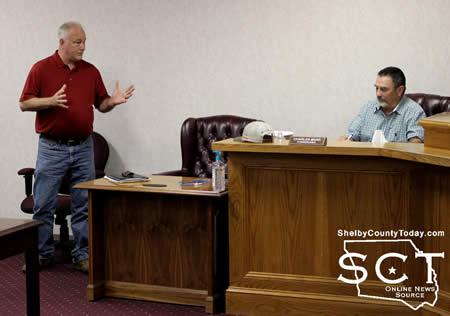