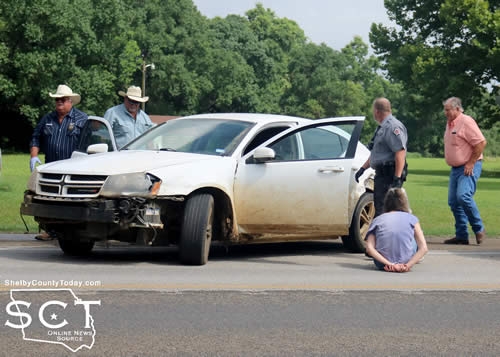 July 8, 2020 - A high-speed chase has resulted in an arrest of one individual and damage to two law enforcement vehicles involved in the pursuit Wednesday, July 8, 2020.

The chase began when the vehicle allegedly was traveling at a high rate of speed in the Joaquin area upon passing Constable Roy Cheatwood.

According to Constable Cheatwood, when he first engaged the vehicle he turned around on it and attempted to stop the white 2013 Dodge Avenger on U.S. Highway 84. The driver continued without stopping.

The pursuit then followed several county roads at speeds of up to 100 mph as it entered County Road 3267 to FM 414 where other law enforcement officers were actively giving chase. The line of vehicles traveled State Highway 87 to Loop 500 where the Dodge turned toward Joaquin.

As the driver continued to evade law enforcement, the Dodge traveled several miles down State Highway 7 East toward Joaquin in Moodyville before turning around to head back toward Center. At that time a Shelby County Sheriff's Department Tahoe and Center Police Department Malibu were involved in a collision with the Dodge as attempts continued to bring the vehicle to a stop.

A 1/2 mile from where it turned around the Dodge finally was stopped. Constable Cheatwood quickly took the driver into custody.

Constable Cheatwood was very appreciative of all law enforcement officers who responded to assist.

"I thank all law enforcement, they all came, I didn't know what I had," said Constable Cheatwood.

Constable Cheatwood also commented a lot of lives were put in danger by the driver until the pursuit ended.

According to the Shelby County Jail arrest log Rebekah Lyn Taylor, 48, of Joaquin has been charged wtih evading arrest with motor vehicle, state jail felony; aggravated assault on peace officer, felony 1; and reckless driving, misdemeanor b. Bond has not yet been set. 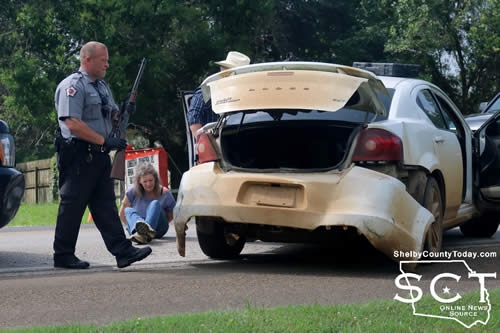 Recovered from the vehicle was a rifle with scope pictured above. 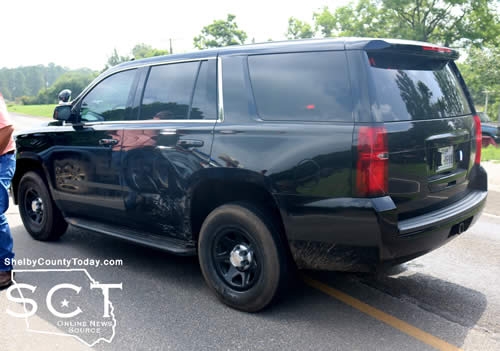 A Shelby County Sheriff's Department Tahoe was damaged during the pursuit. 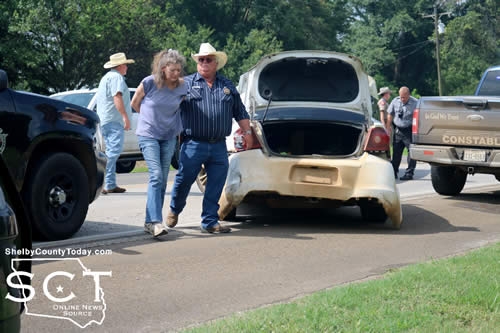 Constable Cheatwood took the suspect into custody and transported her to the Shelby County Jail. 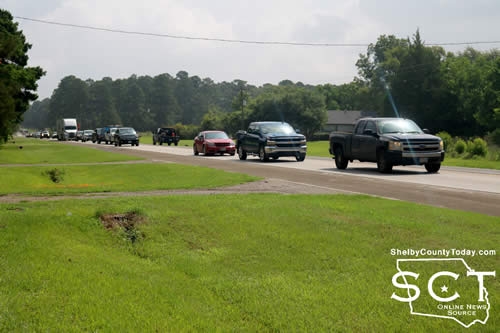 A line of traffic extended in both directions on either side of the location where the Dodge was brought to a stop. 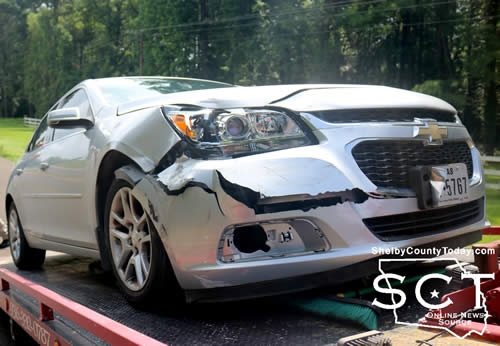 Also damaged as a result of the incident was a Center Police Department vehicle.