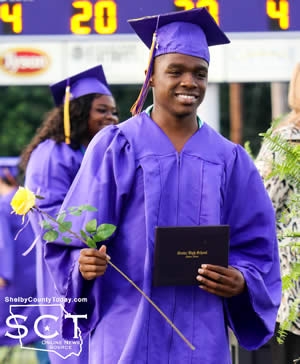 June 21, 2020 - Portacool Park was filled with members of Center High School Class of 2020, friends, and family of De Crockett who lost his life in an automobile crash late Saturday, June 20, 2020.

The crowd gathered in the Portacool Park pavillion in the Center Mini Park where the rememberance opened with Mark Perkins, who graduated with De (DeSkyhen) Crockett, welcoming everyone and sharing some personal thoughts regarding Crockett.

After several spoke, the attendees traveled into a field located behind the pavillion where Pearlie Nash said a prayer. At the completion of her prayer, balloons of red which were De's favorite color, some in the shape of hearts, and some black were released honoring Crockett.