"Doings in the Doctor's Office" by Neal Murphy

October 4, 2019 - My wife, Clara, began her medical career in 1959 when she went to work for Dr. M. J. Buchele in San Augustine. She worked there several years along with Helen Farr until we moved to Houston in 1962. She then worked for several different doctors for the next twenty six years. She has the “inside scoop” of what really goes on behind the scenes in a doctor’s office. 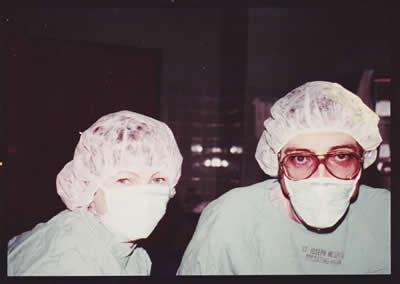 Most of us see doctor’s offices as rather drab and usually full of sick people not on their best behavior. But, that view can be incorrect.

Clara was working for a Dr. Cruce in Houston on North Shepherd Street around 1964. She was receptionist/bookkeeper/lab assistant/nurse for the office. One spring morning when the waiting room was full of people waiting their turn, she heard someone cry out that there was a snake in the room. “A snake? I hate snakes! I am afraid of snakes, everybody knows that.” Clara thought as she responded to the distress call. But, she needed a weapon to fight off a dangerous snake and nothing could be found. She spotted a small cutting board on a cabinet. She grabbed it by its handle and rushed into the danger zone weapon at the ready.

The snake had coiled itself at the base of a pot plant. He was about a foot long and mostly green. “How did it get into our office?”, Clara wondered to herself. She mustered up all her gumption and quickly lay the cutting board on top of the snake, then stomped on it with her foot. The snake never knew what hit him. While this was happening, a male patient ran his finger up her back about the same time as a joke, which almost backfired. “Just for that I am giving you a shot with a square, rusty, needle”, Clara retorted.

The doctor never knew what was going on at the time, but found it amusing after it was over. However, Clara was not amused.

On another occasion a man walked into the same doctor’s office holding a cat in his arms. He walked up to the window and handed Clara the cat. He reported, “We don’t want the cat. Here, take it back.” She realized that he had mistaken their office for the Veterinary office located down the street. As the man turned to leave, Clara protested, “But, sir, this is a doctor’s office. The veterinary office is two doors down.” Apparently not hearing or understanding, the man looked over his shoulder and repeated, “I said we don’t want the cat. Just put it to sleep for all we care.”

As he walked out the front door, Clara raced after him with the cat in hand. She caught him in the parking lot and finally convinced him that he had brought the cat to the wrong office. He reluctantly took the cat back.

Back in the office Dr. Cruce kidded Clara, “Well, I see you almost got a new cat, didn’t you.” “I sure did, no thanks to you”, she replied.

Since Clara performed some lab tests for the office, she would normally take off her wedding rings to protect them from chemicals. On one occasion while she was taking her rings off they suddenly flew off her finger toward the floor, but she never heard them hit the floor. After performing the lab test, her number one project was to find her rings. She looked everywhere but could not find them. Even Dr. Cruce joined in the hunt but to no avail.

As a last resort, Clara asked Dr. Cruce if she could check the inside of his pant cuffs for the rings. He agreed and she found them there. The rings had apparently landed in his pant cuffs on their way to the floor.

Space prohibits me from relating several other incidents, such as getting her finger caught in the posting machine, accidentally breaking a finger by shutting a sliding door on it - she x-rayed it herself. She was even grabbed and kissed on three different occasions by male patients who apparently could not control their passion.