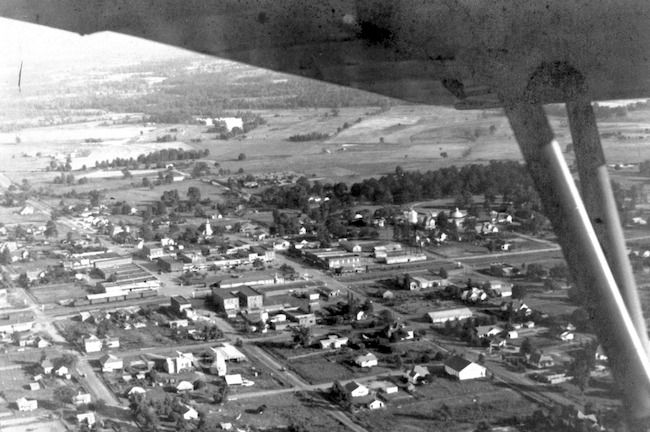 January 23, 2023 - The June 2022 issue of “Tap Root” magazine, which is published quarterly by the Timpson Area Genealogical and Heritage Society, featured an aerial photograph of Timpson, believed to have been taken in the early 1920's. As he studied the photo, 1961 THS graduate and TAGHS member Dow McWilliams noticed something, which he shared with TAGHS members and guests at their January monthly meeting.

Using a laser pointer, McWilliams indicated a frame house in the photo on the large screen in front of the room. “This house was built by my father for my mother when they got married in 1933. What does that tell you about this photo being taken in the 1920s? It didn't happen,” McWilliams revealed. “We had a lot in back of our house where we had a barn and a little chicken house. We kept a cow and I churned butter as a boy. We always had plenty of milk, eggs, and fried chicken. We never had a garden but my mother was a Ramsey and had enough family connections to ensure that there was never a shortage of fresh vegetables.There was a well behind the house and my mother only used well water for cooking”. Pointing to a large structure on an adjacent block, McWilliams continued. “ This building is my grandfather's cotton gin, which was also built in 1933”. McWilliams also pointed out his father's feed and fertilizer business and the gin office, all of which were on the property currently occupied by Brookshire's Supermarket in Timpson. “The last bale of cotton ginned in Shelby County was in our gin in about 1962”, McWilliams shared.

Williams identified a lake to the west of what is now US 87 south of town as belonging to Weeks Crawford at the time. “Weeks didn't allow anyone to fish in that lake, but my friend Carroll Barnes, who lived across the street from us, and I used to ride our bicycles down to So-So Park and leave them by the old scout cabin there and walk to the back side of Week's lake and fish. I can say that now because the statute of limitations has run out on our trespassing”, McWilliams joked. He noted that it is easy to become disoriented when looking at the old photograph because the route of US 59 changed in the mid-sixties to pass through town on the north side of the railroad tracks, directly in front of the former gin location. “I started college at SFA in 1961 and at the end of the summer semester I had three weeks off. I was looking forward to some time off and fishing but my dad had other ideas. I came home to find that he had gotten me a job shoveling dirt on the crew building the new highway through town. I didn't get to go fishing once”!

With the aerial photograph on the screen, McWilliams and others continued to identify buildings and landmarks with which they were familiar, many of which still exist. The wing and strut of the airplane from which the photo was taken is visible in the upper right corner. Weeks Crawford's lake is seen just below the wing in the center of the photo. Just to the left of the strut is the domed First Methodist Church building where McWilliams was baptized, which was replaced in 1950 by the current church building. The cylindrical object to the left of the Methodist Church is the old water tower. To the left of that is the downtown area with the plaza. It was noted that downtown Timpson had three movie theaters at one time and several restaurants and cafes. The railroad, which still occupies the same roadbed, is identifiable by the boxcars below and to the left of the plaza. The depot, which no longer exists, is to the right of the boxcars, along the tracks. The large U-shaped building just below the depot in the photo is the Blankenship Hotel, which was razed in the 1960s. Just to the left of the hotel is Kristensen's Grocery, which no longer stands. Rancho Grande Mexican Restaurant is now located on the corner below Kristensen's. The large buildings on the block below Kristensen's is McWilliam's Cotton Gin. The street running right to left between them is now US 59.

Mr. McWilliams said that anyone who has question about his presentation or wishes to contact him may do so at 903-312-0110 or by e-mail at lmcwilliams@gmail.com.