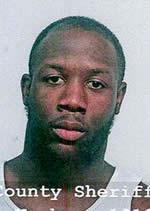 Jayaveon Standley, 27, of Center was arrested on September 30, 2019 for the charge. According to the arrest affidavit, obtained by Shelby County Today, while Standley was an official of the Shelby County Jail he allegedly engaged in deviate sexual activity with an inmate while he was in custody.

Sheriff’s Department Investigator Chad Brown indicated in the affidavit he reviewed jail footage of the incident after receiving report of the alleged sexual activity between inmate and jailer.

Upon reviewing the footage from September 25, 2019, Brown stated he observed Standley and the inmate enter the jail booking room and then the adjoining dressing room.

It’s at that time the alleged incident occurred and Investigator Brown described seeing a sex act between Standley and the inmate.

According to jail records, Standley was released from the Shelby County Jail the same day of his arrest on a $10,000 bond.

In 2017 a former jail Sergeant, Korey McClure, was arrested on similar charges, as well as bribery; however, the cases have yet to be tried in court.