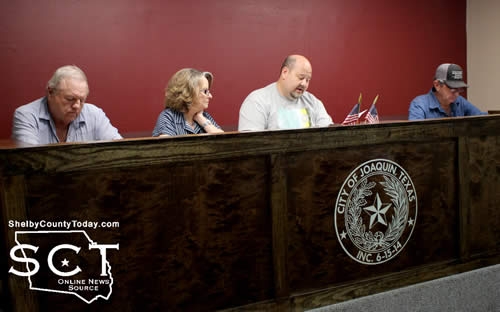 June 19, 2020 - The Joaquin Public Safety Corporation met Tuesday, June 16, 2020, at 5:30pm led by Rusty Wilson, Chairperson, and the meeting began with discussion of property where the Joaquin Volunteer Fire Department (JVFD) has erected a new substation.

Although the agenda item was for the city to consider donating the fire substation to the JVFD, and for the JVFD to assume all the responsibilities, Wilson explained the circumstances were different than that and asked mayor Bill Baker why it had been added to the agenda.

He stated what was done in providing the funds to the JVFD was the right thing; however, the auditor from Axley and Rode said it wasn't handled in the right way.

"He said it was kind of bad situation that [we] own the building that's outside the city limits that's on somebody elses property, kind of like someobody building a house on somebody elses land," said Baker. "He suggested that we just give that fire building to [the fire department] and make it yours."

Fire department personnel were present for the meeting and agreed they would be willing for there to be a document recognizing the JVFD's possession of the building.

It was agreed an attorney would be consulted to get paperwork written to reflect the grant.

Several bills were considered by the Public Safety Corporation including Bobcat Communications $765.09 for repair of radio repeater; Chemserv - hand sanitizer, and then Center Glass for plexiglass in the city offices.

J.D. Cockrell, board member, asked if the plexiglass was for use by the fire department and Barbara Pridgen explained the order was for the countertops in the city offices.

Cockrell and Wilson both responded that should be the city's responsibility and not the Public Safety Corporation. Wilson asked Paula Guzman, City Secretary, if the hand sanitizer was for the city as well.

"All of the emergency stuff that we've been using for COVID we've been paying out of Public Safety," said Guzman.

"There's other supplies here like hand cleaner and everything else, everything totals $20,000, I guess there's employee hours up here too," said Wilson.

Cathy Atkinson, council member, asked Guzman if the bills had been paid out of the Public Safety account and it was confirmed they had been paid, except for the payroll.

Atkinson looked again at the invoices stating the amount to be $26,275.18. The questions over the invoices continued as Wilson then asked Baker about a bill for $16,603 for Electromech and Baker stated that was for wiring for the lift stations and wasn't for Public Safety either.

"I think because she knows it's a FEMA, I think she lumps it all together is that right Paula?," said Baker.

Guzman responded, "Yes, because that's what you asked me to do."

"All of this is supposed to be split, It's all lumped into a FEMA claim but it's still split between our regular city bills and what the fire department got," said Baker.

Conversation continued between the board members and Baker about the payments and what was actually the responsibility of the city. Wilson informed the board the fire department had received their reimbursement of around $5,000.

Cockrell asked if anyone authorized the checks to be written to pay the bills through Public Safety.

"Isn't that the purpose of this board is that we approve to pay all of the bills?," said Cockrell. "If these checks that's been written were already mailed off without board approval, that's a violation."

Wilson shared the check received by the fire department was from the city of Joaquin and not the Public Safety account. The checks for Chemserv and Center Glass were presented during the meeting for approval.

"It was kind of an odd situation but we've never been in this thing before," said Baker.

Cockrell didn't agree with the circumstances dictating action and expressed his concern over the proper handling of the accounts.

"Somebody can personally sue me for misuse of public funds is what I'm getting at," said Cockrell. "I sat on the school board for 12 years and I understand a little bit about public money and it all has to be approved and done the correct way."

Cockrell continued, "Whoever authorized this check to do this, signed it without permission, they could be in hot water if somebody really jumped on you," said Cockrell.

He reiterated things need to be handled correctly.

Wilson gave some history of the Public Safety Corporation to the audience, stating the corporation is a Type A Economic Development Committee which was voted on by the tax payers to share a half cent sales tax. There are specific things for which the funds can only be used.

Wilson listed off those items as included in the Texas Municipal League Economic Development Committee handbook and he explained those items are meant to facilitate projects:

"Everything that we vote on in the corporation board has to be approved by the city council, that's law, and so like I said everything really needs to be taken before the corporation first," said Wilson. "I know in the past, there's been bills that's been put before that we didn't vote on that we went and paid that as Mr. J.D. has said, 'If you do it then you could leave yourself open/liable for a lawsuit."

It was further clarified by Wilson, once an item has been before the board it can then move up to the city council, and there is no other way for that to be handled appropriately.

The conversation of the meeting returned to the radio repeater for the fire department which was a 100 watt unit operating at 30 watts, resulting in a loss of communications a short distance away from the repeater.

A motion carried by the Public Safety Committee to approve Bobcat Communications at $765.09 and reimburse the city for safety supplies for $4,747.59.

Due to concerns over the city or Public Safety Corporation funding projects outside of the city limits, Wilson referenced Local Government Code, Title 12 Planning and Development, Subtitle C1. Additional Planning and Development Provisions Applying to More Than One Type of Local, Government, Chapter 501 Provisions Governing Development Corporations, Sec. 501.159. 'A corporation may acquire, by construction, devise, purchase, gift, lease, or otherwise, or any one or more of those methods and may construct, improve, maintain, equip, and furnish one or more projects undertaken by another corporation or located within this state.'

After considering several bids for fencing around the JVFD substation, a motion carried to approve a bid from AC&C for $18,444.

The antenna utilized by the JVFD hasn't been replaced aince 1978 and a techician reviewing the antenna it was determined the fire department communications will never work correctly, because the antenna is outdated and needs to be replaced.

A motion carried by the Public Safety Corporation to pay Bobcat Communications $5,051.74 to replace the antenna, coaxial cable, accessories, and perform the installation.

The meeting was adjourned at 6:13pm.