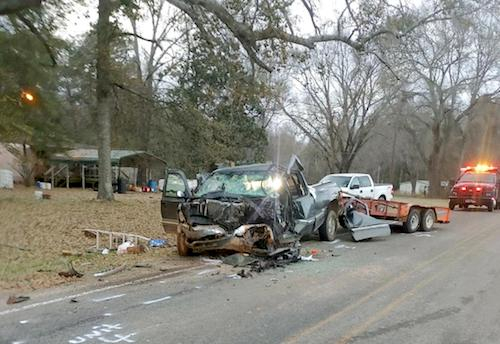 January 23, 2023 - The week of January 15th through 21st yielded 4 total calls for the Joaquin Volunteer Fire Department, 3 of which involved motor vehicle accidents. Here's a summary of the week's events.

The most active day of the week, Sunday, had 2 calls with the first coming in at 4:36pm for an accident involving an 18 wheeler and a pickup tru ck on FM 139. The driver of the pickup truck crashed into the tanker trailer of the 18 wheeler which pinned him inside the cab of the pickup. The JVFD utilized the jaws of life to extricate the man from the crushed pickup and he was transported to the baseball field where a landing zone had been set up. He was then airlifted to a nearby emergency room in critical condition.

Meanwhile, the JVFD provided traffic control on the scene of the accident until the roadway could be cleared. There were no injuries reported from the 18 wheeler driver.

At 7:13pm the second Sunday call came in located a short distance from the earlier one with a truck that had run into the woods at the intersection of FM 139 and FM 2787. The two occupants of the vehicle were unharmed and were able to exit the vehicle. The JVFD controlled traffic on the roadway until the vehicle could be removed from the woods and loaded onto a tow truck.

Tuesday morning at 9:06am a call was received for an accident in front of Brookshire Brothers on the Haslam Strip. An 18 wheeler had bumped into the back of a sedan at the red light and the sedan driver requested to be checked out by EMS. Once EMS was on scene the sedan driver was inspected for injuries and the two vehicles involved in the accident were removed from the road. The JVFD cleared the scene once law enforcement arrived.

The final call for the week came in at 8:54pm on Wednesday in regards to an elderly man requesting assistance on County Road 3590. The page stated that the man had fallen, but was able to climb back into his chair. The EMR team responded to ensure he was alright after his fall and that he did not need any further medical assistance.

With that, this report will come to a close. The Joaquin Volunteer Fire Department hopes everyone has a great and safe week ahead.