November 14, 2022 - The week of November 6th through 12th was a busy one for the Joaquin Volunteer Fire Department with 6 total outings. Here’s a summary of the weeks events.

The calls began Sunday night with a person in need of medical attention in the lobby of the Executive Inn and Suites on the Haslam strip. The JVFD EMR team responded to monitor the patients vitals until Allegiance EMS could arrive for transport. 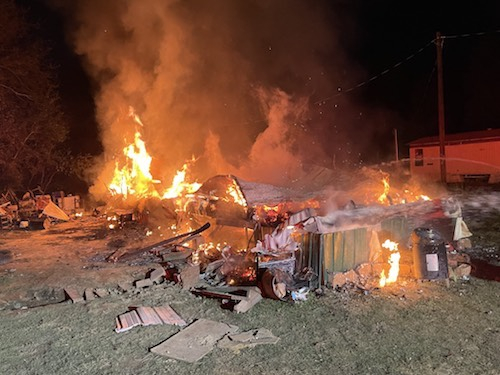 The next call came in early Tuesday morning for a trailer house on fire in the Cool Breeze trailer park. First responders on the scene found a fully involved trailer with the roof already caved in. With help from DeSoto Fire District 1, the JVFD was able to completely extinguish the blaze after about 2 hours of fighting. 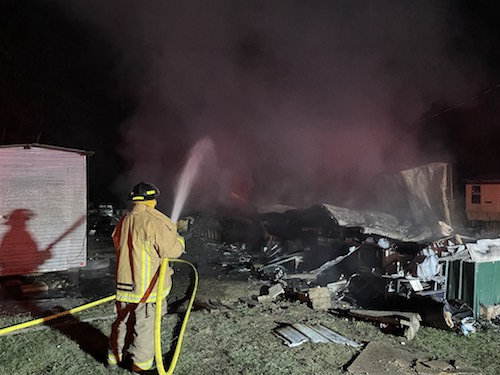 Another medical call would come in Wednesday evening, this time at the Family Dollar on Highway 84 East. This patient was suffering from some form of respiratory distress with chest pain. The EMRs responded to monitor the patient until Allegiance could arrive to transport him to a local emergency room.

Both Thursday’s and Friday’s calls would be in regards to DOAs on County Road 3455 and North Preston Street respectively. The JVFD responded to assist funeral home personnel with collecting the deceased people.

The final call for the week came in Saturday afternoon for a person feeling ill and dehydrated on County Road 3635. The JVFD arrived at a similar time to Allegiance, and assisted in getting the patient to the ambulance.

In other news, the Joaquin VFD will be hosting another blood drive with Lifeshare Blood Center this Saturday, November 19th from 9am to 2pm at JVFD Central Station on the downtown square in Joaquin. Those who come to donate blood will be given coupons for free turkeys and hams, just in time for Thanksgiving.

With that, this report will come to a close. The Joaquin Volunteer Fire Department hopes everyone has a great and safe week going forward.